Let us take a look at the highlights of the action-packed final day of the 2016-17 edition of the Border-Gavaskar Trophy:

India continued consolidating their position in Test cricket as the most formidable side, crushing Australia by 8 wickets in the fourth and final Test at Dharamsala. India knocked off the remaining 87 runs of the 106-run target without much qualm and won the game in the first session. KL Rahul raced to his sixth fifty in seven innings. After India lost two wickets in quick succession, Ajinkya Rahane launched a furious onslaught, playing a firebrand innings towards the end to help India crush Australia. Let us take a look at the highlights of the action-packed final day of the 2016-17 edition of the Border-Gavaskar Trophy:

KL Rahul’s amazing consistency: Rahul began the day with a single and soon got in the groove and began hitting boundaries. He was helped by Australia’s decision to bowl Steve O’Keefe with the new ball, and runs flowed easily for India and their opening batsman. Rahul completed his sixth half-century for the series and also got the opportunity by his captain to hit the winning runs for India. He had already cracked 3 boundaries on the third evening to give India an early advantage, and in the fourth over of the final day’s morning, he cracked two boundaries to make sure India remain ahead. He finished a memorable Test and a series with an unbeaten 51 off 76 balls with 9 boundaries.

Aggression redefined by Rahane: From aggressive field set-ups to smart bowling changes, from patting teammates’ backs despite an embarrassing drop to aggressive batting, Rahane made his debut as India’s 33rd Test captain in style. He walked out to bat on the fourth morning when India had lost Murali Vijay and Cheteshwar Pujara in quick succession; he took the game away from Australia who had made inroads into the Indian batting line-up.

Rahane was not merely aggressive: he was belligerent. He had fallen to Pat Cummins in embarrassing fashion when India had needed him to fire in the Ranchi Test. On Tuesday he extracted revenge. Cummins, whose short balls had tormented Indians including Rahane, was smacked for two sixes, with both hits being very special.

Rahane picked a short ball banged into his body to send it flying over mid-wicket, and made room to clobber the ball over extra-cover. The second hit was even more special. Rahane made room and thwacked the ball over extra cover, displaying both sheer power and exquisite skills.

A forgettable day for Australia: The writing was on the wall with Australia suffering the worst batting show in the second Test. On the third day they had taken a desperate DRS appeal which they might not have in a wiser environment. Australia needed early wickets on the final day to make any kind of pressure, but they doused all such hopes when O’Keefe was asked to share the five-over-old ball with Josh Hazlewood. Australia could have begun with the pacers from both ends, but then, it would not have made any difference as such. 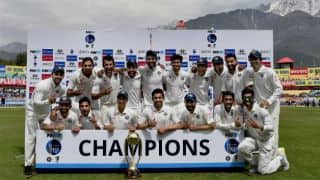 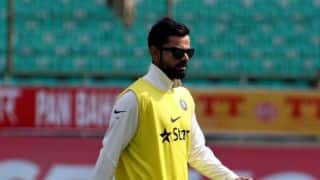