No Australian team had ever come back from 0-2 in a five-match series and won.

Needing to make history, Aaron Finch‘s Australia did just that by winning the final three ODIs to claim the series 3-2 as they beat India by 35 runs in the final match in New Delhi on Wednesday.

Usman Khawaja his second hundred of the series to help Australia make 272/9, before Adam Zampa led a very fine bowling effort to keep India to 237. The fight that coach Justin Langer has repeatedly spoken of was on display. (READ: We need to raise our standard of cricket: Virat Kohli)

Here are the talking points:

Australia take Jadhav out of the picture

In eight ODIs before the Ranchi game last week, Kedar Jadhav s economy rate was a very good 5.05 and he has been consistently able to break partnerships and give batsmen problems. But in three ODIs since then he’s conceded 84 runs in eight wicketless overs.

In Ranchi, he was hit for 32 runs in two overs. In Mohali, where dew was a factor, Jadhav went for 44 in five. In Delhi on Wednesday, Jadhav bowled one over that cost eight runs. From being a regular bowler, he was reduced to the sidelines in a very tactical move by Australia’s batsmen.

Two wickets for the addition of four runs had Australia at 229/7 in the 46th over, with the specialist batsmen all dismissed. But instead of bowling out Australia for under 250, India allowed them to make it to 272/9. And that owed largely to a partnership of 34 in 16 deliveries between Jhye Richardson (28) and Pat Cummins (13) – an aspect of the win that Langer afterwards singled out.

That partnership of 34 took Australia to 263 and the nine additional runs that Richardson put on with Nathan Lyon lifted the total to a score that no Indian team had chased down at the Feroz Shah Kotla in 25 years.

The man Australia were without in Mohali and who they dropped Shaun Marsh for in the decider came up trumps. Marcus Stoinis had passed a fitness test on match eve and come game day, was slotted back into the XI. His 27-ball 20 was in the end just a footnote in Australia’s scorecard, but with the ball his first wicket of the day was the biggest.

Virat Kohli had begun with an ominous push into the offside for four off Cummins that had the fans delirious, but his dominance was short. On 20, a bit of extra lift off the Kotla deck did for him as he cut and edged behind. Stoinis erupted, and the Kotla sank.

Stoinis, who overcame a thumb injury to play in place of Marsh, went on to end the game with the wicket of Kuldeep Yadav off the last ball, but getting Kohli was where India’s chase was actually snuffed out.

Chasing 273, India lost Shikhar Dhawan early and Kohli’s wicket for 20 was effectively the deal-closer. But after 68/2, with Rohit Sharma looking good, all was not lost. With the World Cup looming, Rishabh Pant and Vijay Shankar had a great opportunity to show what they can offer in a tough chase – something Kohli has been demanding of his players.

Instead, Pant breezed to 16 off 16 balls before being duped into a prod to slip off Lyon and Shankar (16 off 21) pulled Adam Zampa in the air to deep midwicket.

Zampa’s double-blow, with Carey on the job

The wicket of Shankar had Zampa running towards Khawaja to hug him for a sliding boundary catch, and for his next two wickets he had the wicketkeeper Alex Carey to thank. Bowling the 29th over of India’s chase, Zampa saw Rohit (56) charge out to him, swing across the line only to lose his bat – it landed near the 30-yard line – and Carey to stump him. Zampa’s instant thinking when he saw Rohit skip out was excellent, but Carey’s brilliance was also to the fore because he his visibility had been blocked by the batsman as the ball broke in.

Three deliveries later, Ravindra Jadeja was lured forward by a teasing delivery that pitched and went away from his forward grope. Carey, alert as ever, collected the ball and in an instant broke the stumps as Jadeja tried to get his back leg in. Replays showed he was on the line, and the Carey-Zampa alliance was jubilant. 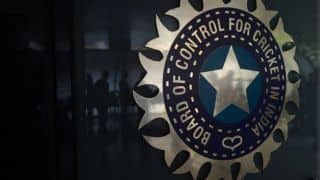