Day Two of the only Test between India and Bangladesh at Hyderabad ended with visiting team s score at 41 for 1 after India declared at 687 for 6. Bangladesh s misery was compounded when Soumya Sarkar was caught by Wriddhiman Saha off Umesh Yadav in the third-last over of the day. Tamim Iqbal (24) and Mominul Haque (1) were at the crease, the visitors still trailing India by 646 runs. The headlines belonged to the Indian batsmen. Virat Kohli led the way with a 246-ball 204 (his fourth in as many consecutive series), while Murali Vijay (yesterday) and Saha (today) both got their respective hundreds. Cheteshwar Pujara and Ajinkya Rahane both fell in the eighties, while Ravindra Jadeja waltzed his way to a half-century. After a record-breaking day, we present the statistical highlights from the contest.

This list does not include records set by Kohli. For all records set by Virat Kohli (there is always at least a dozen everyday) during today s innings, click here.

India also became the first team to score 600 in 3 consecutive innings. They had gone past the 600-mark in the Mumbai and Chennai Tests in the previous series, against England.

This was the 9th 650-plus score by India, the joint 2nd-most by a team. West Indies have also scored 9 scores in excess of 650. Australia hold the record with 14 innings.

The unbeaten 118-run stand between Saha and Jadeja is 5th-highest against Bangladesh for the 7th wicket, after Prasanna Jayawardene and Chaminda Vaas (223*), Mahela Jayawardene and Kithuruwan Vithanage (176*), Sourav Ganguly and Sunil Joshi (121) and Elton Chigumbura and Tatenda Taibu (119).

Saha scored the second century of his career. He is the fifth Indian wicketkeeper to have 2 hundreds after MS Dhoni (6), Farokh Engineer, Syed Kirmani and Budhi Kunderan (2 each). Saha s unbeaten 106 is also his highest score.

Rahane s 82 was his 10 Test fifty and 2nd against Bangladesh. Rahane has scored hundreds against six Test-playing nations but none against Bangladesh (his highest is 98). He has not played Pakistan or Zimbabwe.

Jadeja scored his 5th Test fifty and first against Bangladesh. During this course, Jadeja also went past the 900-run mark in Tests. Jadeja s strike-rate of 64.8 is the 3rd-best among the Indian batsmen (at least 900 runs) after Sehwag (82.18) and Kapil Dev (80.91). This excludes matches where balls faced is not known.

The 222-run stand between Kohli and Rahane for fourth wicket their third in excess of 200. Of Indian pairs, only Ganguly and Tendulkar have 3 double-hundred stands. The record is held by Ricky Ponting and Michael Clarke (4).

Bangladesh s opening partnership added 38 while India s first-wicket stand was worth only 1. This is the 3rd instance of a Bangladesh opening pair scoring more than their Indian counterpart in the first innings. The previous two instances came in the 2nd Test of 2004-05 and the 1st Test of 2007.

Vijay, Pujara, Kohli, Rahane, Saha and Jadeja all scored fifties. This is the 6th instance of six Indians scoring doing the same in an innings and the 1st against Bangladesh. All six instances have come against different teams. The record is of 7 (England against Australia in 1934, Pakistan against India in 2005-06 and Sri Lanka against England in 2006).

Taskin Ahmed, Kamrul Islam Rabbi, Mehedi Hasan, Shakib Al Hasan and Taijul Islam all conceded at least 100 runs. This is the 1st instance of five Bangladeshi bowlers giving away 100 runs in an innings and 9th overall. The record is of six (Zimbabwe against Sri Lanka, 2004). The last instance of five bowlers conceding 100 runs in an innings was by England against Australia in 2009.

A total of 8 Bangladesh bowlers bowled in the innings. This was the 16th instance of Bangladesh using 8 bowlers in an innings and 2nd time against India, after 2009-10. This is also the 3rd instance in this season by any team. 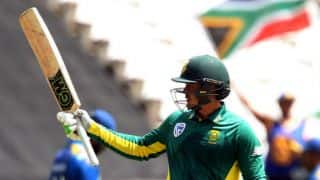 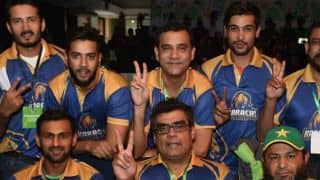