India and England were expected to struggle with the ball in each other’s home grounds.

Despite their historic connection, India and England do not usually feature on their respective lists of rivals, especially in the shorter versions of the sport. Even then, the contests have produced quite a few outstanding bowling performances over the years. Abhishek Mukherjee lists a few.

The bowlers did not do a bad job, after all. Let us have a look at some of the best.

1. Ian Botham, 11-0-56-4 at Headingley, 1982: Bob Willis had given India the first jolt and Paul Allott removed Sunil Gavaskar, but it was Botham’s spell that ripped the heart out of England’s middle-order: coming on second-change, Botham removed Dilip Vengsarkar, Sandeep Patil, and Gundappa Viswanath in an outstanding spell of swing bowling.

It turned out to be the classic all-rounder’s duel: as Kapil Dev went all out, Botham kept on troubling the batsmen at the other end. His figures were ruined by Kapil’s assault, but he eventually had the last laugh, dismissing Syed Kirmani to end the 40-run eighth wicket partnership. India were eventually bowled out for 193 and lost by nine wickets.

2 & 3. Kirti Azad, 12-1-28-1; Mohinder Amarnath, 12-1-27-2 at Old Trafford, 1983 World Cup: It was expected that the Indian seamers would play a crucial role in the 1983 World Cup semi-final, but Kapil probably did not expect a lot from Azad and Mohinder, who were probably supposed to fulfil the role of the fifth bowler between them. Graeme Fowler and Chris Tavare added 69, but failed to accelerate; Kapil, realising that pace would be of no effect on the pitch, introduced the duo.

Seldom has Old Trafford witnessed such a stranglehold from a trundler and a slow off-spinner: Mohinder and Azad sent down 24 overs between them, conceding a mere 55 runs. A frustrated David Gower edged one to Syed Kirmani off Mohinder; Allan Lamb was run out attempting a desperate single; Mike Gatting missed an off-cutter from Mohinder; and Botham, who tried to break the shackles by playing a reverse-sweep off Azad, was bowled next ball. The slow men had bowled England out of the tournament.

4. Vic Marks, 10-1-35-3 at Chinnaswamy, 1984-85: Gavaskar and Krishnamachari Srikkanth added 70 for the opening stand, scoring freely against Norman Cowans, Neil Foster, and Richard Ellison. Runs kept coming until Gower summoned the relatively unheralded Marks, and runs dried out. While Cowans snared Srikkanth, Marks removed Gavaskar and a promoted Kapil in quick succession. Runs dried up, and Marks hurried through his overs, removing a struggling Vengsarkar as well.

A late surge from Mohammad Azharuddin saw India reach 205 for six in 46 overs, but Fowler and Lamb ensured an England victory with an over to spare.

5. Ravi Shastri, 10-1-40-4 at Nagpur, 1984-85: With the series lost 0-3, India had yet another go at the Englishmen at Nagpur. It seemed to be another one-sided affair as Fowler added 70 with Martyn Moxon — but once again a spinner did the trick: on came Shastri to clean bowl Fowler and Gatting in quick succession; he had Gower caught and bowled; and a dangerous-looking Lamb was stumped by the ever-alert Sadanand Viswanath  off him.

England reached 240 for seven thanks to some late-order hitting from Chris Cowdrey, but Mohammad Azharuddin, Gavaskar, and Kapil all contributed with the bat before Shastri arrived at the scene. With Viswanath for company he added an unbroken 37 for the eighth wicket to result in an Indian victory with 14 balls to spare.

6. Chris Cowdrey, 1-0-3-1 at Chandigarh, 1984-85: When Sachin Tendulkar bowled his famous last over in the Hero Cup semi-final his figures read 1-0-3-0. While Tendulkar got to bowl mostly at Allan Donald, Gower’s risk meant that Cowdrey had to bowl to specialists. Thunderstorm had reduced the match to 15 overs a side, and England piled up 121 for six thanks to some frantic hitting from Lamb.

India reached 111 for three in 14 overs, and Shastri (who would later fall for a 45-ball 53) had looked set to finish things off. Then Gower played a masterstroke and threw the ball to Cowdrey: he had not bowled in the match before. Cowdrey responded immediately by clean bowling Yashpal Sharma.

Gavaskar walked in at six and managed a single, but Shastri attempted a suicidal run and fell short of the crease. Lalchand Rajput managed a single off the only ball he faced, but Gavaskar looked surprisingly stagnant, managing a mere two off the four balls he faced from Cowdrey. The last over saw only three runs being scored.

7 & 8. Javagal Srinath, 9-1-41-5; Paul Jarvis, 8.4-1-35-5 at Chinnaswamy, 1992-93: Seldom had an Indian bowler performed with such fire the way Srinath had at his home ground that day. He was brought on first change and trapped Alec Stewart leg-before almost immediately; Robin Smith followed, edging one, before Srinath unleashed the real snorter: Srinath’s ball split the middle-stump into half as Gatting walked back to the pavilion. He was given a break by Azhar after what was one of the fastest spells by an Indian; he came back to remove Chris Lewis and Phil DeFreitas in quick succession as England reached 218 for nine in 47 overs.

It was Jarvis’ turn to hit back, and he rose to the task: India set off to 61 for one before Jarvis had Vinod Kambli caught behind and removed Azhar and Pravin Amre shortly afterwards. India was eventually derailed by the dismissal of Navjot Sidhu, and after Jarvis added Kiran More to his tally, it seemed to be all over. Kapil, though, had a trick or two up his sleeve, and added 45 with Anil Kumble, starting a revival of sorts: Kumble’s resistance came to an end after Jarvis ran through his defence, and India slumped to 170.

9. Harbhajan Singh, 10-1-43-5 at Wankhede, 2001-02: Despite England’s two-run victory at Kotla India were 3-2 ahead in the series. Though Nick Knight fell early, Marcus Trescothick and Nasser Hussain went after the Indians, and though Sourav Ganguly broke the stand England crossed 150 at close to seven an over; then, with the score on 153 for two after 22 overs, Ganguly had Hussain stumped; and hell broke loose.

Harbhajan tossed one up, Graham Thorpe missed a wide, and Ajay Ratra removed the bails; four balls later Trescothick hit one back to Harbhajan; Paul Collingwood fell for one, while Ashley Giles scored a duck. Harbhajan had run through the middle-order in a spell of 1.5-0-2-4.

He later added James Foster to his tally, but Andrew Flintoff scored a belligerent 40 to take England to 255. Despite Ganguly’s counterattacking 80 India slumped to 250, and the series was squared.

10. Ashish Nehra, 10-2-23-6 at Kingsmead, 2003 World Cup: Like the instance mentioned above, India were bowled out for 250 despite some ruthless batting from Tendulkar (including the iconic six off Andy Caddick) and a decent performances from Rahul Dravid and Yuvraj Singh, India lost four wickets in the last four balls of the innings.

The match marked a change of hands as Zaheer Khan took over the baton from Srinath: Ganguly gave Zaheer first over, Knight was run out brilliantly by Mohammad Kaif, and Trescothick fell to Zaheer; after that it was an all-Nehra show: Hussain, trying a slice, edged one to Dravid; Alec Stewart was trapped leg-before next ball; and a full-pitched ball moved a shade away to induce an edge from Vaughan.

Collingwood and Flintoff showed some resistance, but there was no stopping Nehra: he vomited on the field, ate a banana, let one rip from leg-middle, the ball took Collingwood’s edge and went to first slip; the fifth wicket came when he found Craig White’s edge, and Ronnie Irani edged one to second slip to give Nehra the best figures for an Indian in World Cup. Flintoff went down firing as India won by 82 runs.

11. Steve Harmison, 10-0-22-4 at Lord’s, 2004: India had done a competent job in England two years earlier, but playing a rampant Harmison on a bouncy pitch was never the easiest of tasks. VVS Laxman, opening batting in the absence of Tendulkar, struggled against Darren Gough and Harmison before he was cleaned up by the latter; the disaster continued with the run out of Kaif and the early dismissal of Virender Sehwag.

Ganguly, meanwhile, went berserk at the other end, eventually falling to Harmison for a 119-ball 90; Harmison had Dinesh Karthik caught-behind soon afterwards, and it was left to Dravid to lead the resurrection. Harmison had one last bite at it, removing Dravid for 52, and India were bowled out for 204. It was another thing that England ended up losing the match by 23 runs.

12. Munaf Patel, 8-2-18-3 at Jaipur, 2006-07: The match was played on a slow, low pitch, and Munaf struck almost immediately, trapping Ian Bell leg-before. Flintoff promoted himself at three (and was snared by Irfan Pathan); Michael Yardy, also surprisingly promoted, was dismissed leg-before by Munaf as well; when Dravid took him off, Munaf’s figures read 5-2-8-2.

Dravid brought him back, and Kevin Pietersen punched him for four off the first ball of his seventh over. Three balls later Munaf had his revenge as Pietersen edged him to Tendulkar; his figures were ruined when he conceded five off his last over (four of which came off a Collingwood square-drive), but he had already done the damage.

With Ramesh Powar picking up three as well, England were bowled out for 125. India were in trouble after reaching 68 for one, and though they lost a few wickets in quick succession they won the match by four wickets.

13. Ajit Agarkar, 10-0-60-4 at Old Trafford, 2007: Though Tendulkar and Yuvraj Singh had helped India reach 212 from 32 for three, the target was never going to be enough for England. Zaheer clean bowled Alastair Cook in the first over, but it was Agarkar who ran through the top-order: the bouncer on off-stump came too fast on Matt Prior, who was caught at third-man; Agarkar bowled a length delivery outside off, Bell shouldered arms, and the ball jagged back to hit off-stump; and Pietersen tried to pull another bouncer that was too fast for him, which resulted in a loopy catch at square-leg.

Agarkar was far from finished: he bowled one full outside off, and Flintoff’s drive flew to Yuvraj at point; his figures read 7.4-0-49-4; he had gone for runs, but he had reduced England to 95 for five. They lost two more wickets by the time they reached 114, but a 99-run seventh-wicket stand between Ravi Bopara and Stuart Broad saw England home. 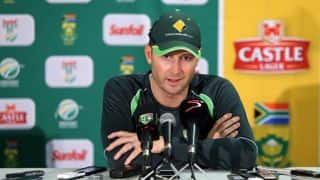 Ashes 1890: Old Trafford witnesses the first Test to be abandoned without a ball being bowled