Stuart Binny's selection in the Indian side for the first Test at Nottingham was criticised.

Stuart Binny’s selection in the Indian side for the first Test at Nottingham was criticised as he wasn’t given enough overs. He was primarily selected as a bowling all-rounder, but his batting sealed the deal in the end against England. Nishad Pai Vaidya opines that Binny’s role should have been defined.

Something didn’t seem right about Stuart Binny’s selection for the Test side. Though he had a decent First-Class season for Karnataka and made an impression in the shorter formats, something was amiss. Some asked the question: Can he make it into the white flannels on the strength of his batting? Others asked: Is his bowling good enough to trouble the batsmen at the highest level? Things only intensified when MS Dhoni didn’t give him enough overs, as England went about their job at Trent Bridge in the opening Test. Thus, when Binny walked out to bat in the second innings, he was not only battling for his side, but he was also under tremendous pressure after being overlooked by his captain as a bowler and having flopped in the first innings.

Why was Binny picked in the side in the first place? His knock in the tour game prompted the team management, which pushed them to hand him a Test cap. But, this batting all-rounder batted at No 8 and wasn’t given enough overs. His swing is said to be useful, but for skipper Dhoni, it was only an afterthought. Given his First-Class record, one can say that Binny is more of a batsman who bowls and that is the role he should have been picked for.

With his fighting, yet positive innings of 78, Binny has now put the team management in a spot. Had that not come, they might as well have been axed.  Ravichandran Ashwin would have been the  obvious choice. But, the team management has more to think now. Two spinners are not going to do the job at Lord’s. What this move may do is give Binny a promotion to No 7 and Jadeja may drop down to No 8. The confidence Binny has inspired with the bat should help him retain his spot for Lord’s despite all the talk. It was clear though, that he is more a batsman than a bowler.

The positive aspect was the fact that Binny looked very positive in his approach even when India were in trouble. This helped India come out of the muddle, at a time when even Jadeja was struggling to get bat to ball. This is an approach one has seen from him over the time. Even during the Irani Cup final, his ton was instrumental in good bowling conditions for seamers, where he attacked them. This is something that would keep India interested as he did not look tentative on the day.

India now move to Lord’s with the series locked 0-0. It is a long summer and there is a lot to play for in the days ahead. India would now focus on their combination ahead of that Test as they need to get their best eleven on the park.  At the same time, the team needs to determine the best way to use Binny. 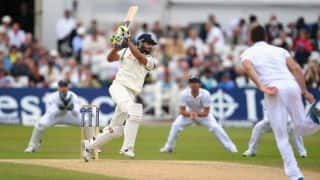 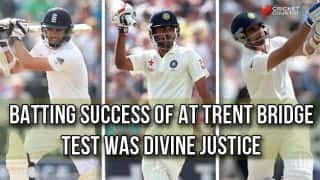