India and England played a nerve-wracking T20 International (T20I) at Edgbaston. In a match full of a number of ups and downs, England emerged victorious by a mere three runs, as for once MS Dhoni was unable to pull off a close match. Shiamak Unwalla looks at the highlights of perhaps the most thrilling game of India’s tour of England.

England get off to underwhelming start: Much was hyped up about the expected explosion at the start from the likes of Jason Roy and Alex Hales. While Hales’ 40 off 25 balls was instrumental in getting England to 100 by the 15th over, Roy’s 10-ball eight meant that he failed to make good on the immense hype surrounding his inclusion.

Eoin Morgan plays a blinder: Eoin Morgan failed to impress in the One-day International (ODI) series, and would have been under tremendous pressure going into the T20I, especially as skipper. But what a game he had here today! He came in 85 for four off 11.4 overs. He scratched about for his first 15 balls, scoring at just about run-a-ball. But after the 15th over, he unleashed a flurry of sixes and fours to ransack the Indian bowling en route to a tremendous 71 off 31 balls.

England scorches 81 runs off five overs: England got nowhere in their first 15 overs, but the duo of Morgan and Ravi Bopara thrashed the Indian bowling around, with Bopara whacking three fours and a six to make 21 not out off nine deliveries.

India cruise at the start: Ajinkya Rahane swept one for six off Moeen Ali and was bowled just a couple of balls later. However, thanks to Shikhar Dhawan and Virat Kohli put on 79 runs in less than nine overs before Dhawan’s dismissal. Both batsmen scored runs at will and managed to find the boundaries at regular intervals.

Virat Kohli finds some late form: It took over two months and fifteen international innings for Kohli to score a half-century, but he managed to do so in terrific fashion. He looked positive from the start, and managed to hit boundaries with clinical regularity. His 41-ball 66 was laced with nine hits to the fence and one hit over it.

MS Dhoni fails to finish the game: How many times has Dhoni pulled out victory from the throat of a sure defeat? It would take a statistician of immense skill to find the exact number. How many times has Dhoni floundered a chase? That would be a much easier question to answer since there would be so few. Dhoni for once remained unbeaten at the end of a chase which India lost, though he managed to hit a four and a six in the final over of the match. India needed 26 off the last two overs, 17 off the last eight, 11 off the last five and nine off the last four. But with five runs needed off the final delivery, Dhoni could only get a single as England celebrated a nail-biting finish to win by three runs. 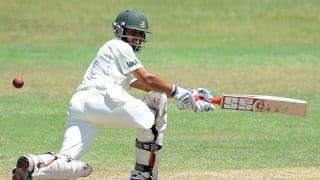