Instead of the promise of a morale-boosting final Test, this one threatens to be even worse than the Ageas Bowl and Edgbaston for India.

It s a familiar tale unfolding, and one that the The Oval is fond of recounting. In 12 visits to the central London venue, India have won one of 12 Test matches – and that was back in 1971. Since then, India have drawn five and lost their last two trips there, by an innings and eight runs in 2011 and an innings and 244 runs in 2014.

Ravi Shastri, India s bombastic coach, said before this dead rubber that India were not here to throw in the towel or take the first flight home . But with a deficit of 158 runs with four wickets remaining, India are down and almost out.

The day began with India s bowlers desperately searching for wickets, and when stumps were drawn it was India batting with survival on their mind. Test matches are won by either so many runs or so many wickets, and that is why both are critical to the end result. The moment you start to flag at either discipline, the opposition senses an opportunity. Jos Buttler and Stuart Broad were allowed to add 98 runs in the first half of the day and that shoved India onto the back foot.

Jasprit Bumrah struck early to get Adil Rashid lbw with a sharp inswinger, and plenty of swing on the second morning saw both Ishant Sharma and Bumrah ask questions of Rashid and Buttler. But with gumption and grit, England s ninth-wicket pair endured.

His decline as a Test batsman since being struck on the face by Varun Aaron in 2014 aside, Broad has been able to contribute little cameos sporadically. Today was one such. Runs came easy to Broad, who punched Ishant through extra cover for four and then easily glanced an errant full toss off the pads. Buttler s ease at the crease saw him pummel runs either side of the wicket, and only a good ball saw him cut off before a hundred. By that time, however, England had enough runs on the board. For a side that believes that 250 is enough, getting to 332 was massive.

What India s bowlers achieved on day one at The Oval, they and the batsmen undid on day two. The bowlers didn t do the job required on the second morning, which saw England move from 198/7 overnight to 304/8 by lunch, but falling to 174/6 by the close of play on Saturday has once again shown up India s woeful batting, barring Virat Kohli, and put England on course for 4-1 win.

It might just end up as the defining image of the series: Kohli, edging Ben Stokes to Joe Root at second slip for 49. India s talismanic captain out to his opposite number, who while struggling with the bat has owned the upper hand as skipper. For all of Kohli s success this series – 593 runs at 65.88 – his team has been beaten by a poor England side, one which has batting and catching concerns yet leads 3-1.

Without labouring the point, the frailty of India s batting was once again laid bare on Saturday. Shikhar Dhawan failed, KL Rahul made his highest score of the series without making a serious dent in England s plans, Cheteshwar Pujara got a dogged start only to throw it away, Ajinkya Rahane s quixotic series continued with a duck and Rishabh Pant s downward slide continued.

England s bowlers applied themselves superbly, producing an assault that put India on the mat. India can offer no arguments during this Test because they have been out-played by England. If they have ambitions of improving their Test status outside of Asia they will need to be honest about their problems. Kohli and Pujara aside, they lack genuine Test batsmen. Rahane s fall has been swift, even if he has scores of 81 and 51 in the series.

India were meant to be playing for pride in this Test, but instead they allowed Buttler and Broad to take England s score to gross proportions and then underwhelmed with the bat. In each Test of the series, India have had opening but more often than not they have been squandered. With each passing defeat, the pain of missing opportunities has left Kohli s team with little to fight with. After losing the morning session they were unable to compete with the bat, and now 4-1 looks a distinct possibility.

When the new year began, it was with plenty of promise as Kohli s top-ranked India went to South Africa with genuine promise of competing. There, they lost 1-2 and here are 1-3 down, with only unforeseen rain and a dramatic bowling and batting revival the possible reasons for stopping England winning 4-1. Instead of the promise of a morale-boosting final Test, this one threatens to be even worse than the Ageas Bowl and Edgbaston. 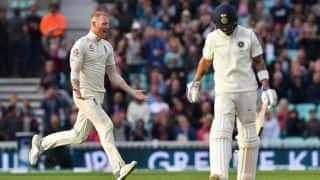