Despite losing the first ODI at Pune, it is unlikely England will make wholesale changes to their playing XI for the Cuttack ODI.

The change of format and a short break did not quite change the fortunes for the English side, as they started the limited-overs leg of India tour with a loss. After losing the five-match Test series 0-4, they were expected to do well in the shorter formats. Under Eoin Morgan, a different-looking limited-overs side had arrived in India. In Morgan, Jason Roy, Alex Hales, Jos Buttler, David Willey and Sam Billings all limited-overs specialists this England side was expected to pose serious threat to Virat Kohli and his men. It did play some exciting cricket, and yet ended on a losing note in a run fest at Pune.

The loss in first ODI notwithstanding, England will look to bounce back in the second ODI at Cuttack on Thursday. They were slightly unfortunate in the first game, where they lost in spite of scoring 350. Their batsmen, who were somewhat assisted by wayward death-overs bowling by Indians, did well to put up a challenging total. Their bowlers were impressive too, early on, when they reduced India to 63 for 4. It took a Kohli and Kedar Jadhav masterpiece for India to stage a comeback from there and win the match.

Looking back at their performance in the first ODI, England must more or less be satisfied. Barring Hales, all the batsmen were among the runs. On the bowling front, leg-spinner Adil Rashid was a big letdown. However, it is unlikely England will make wholesale changes to their playing XI for the Cuttack ODI. Let us take a look at their probable XI:

Top-order: England s top-order batting-order in general looks sorted. Limited-overs specialists Roy and Hales appear to be the best choices for the opening slot. Roy slammed 61-ball 73 in the first ODI. Even in the warm-ups before the series, he looked in good form. Hales, who had backed out of the Bangladesh series, also looked in fine nick in the warm-ups but was sent back by a brilliant direct-hit from Jasprit Bumrah in the first ODI. Both these batsmen should open the batting in the second game at Cuttack too. No. 3, a slot reserved for Joe Root, does not even need any debate.

Middle-order: The English middle-order wears an explosive look. Skipper Morgan, who along with Hales skipped the Bangladesh tour, remains a vital cog in the team s limited-overs batting line-up. The experience he brings to the table at No. 4 spot is unmatched. Also his ability to play according to the situation sets him apart from others. Following him in the order are Buttler and Ben Stokes. Both these players play aggressive brand of cricket and are indispensable part of this line-up. Though England have Jonny Bairstow and Sam Billings warming the bench, the current batting line-up seems too good to be changed.

Lower-order and bowlers: With the top-order players picking themselves, we move to the lower-order and bowlers. The reason why England have done well of late in the shorter formats is the presence of quality all-rounders. With Stokes playing in top-six, England have Moeen Ali at No. 7. The off-spinner can bat at any position in the line-up, and can attack or defend as per the need of the hour. Then there are Chris Woakes and David Willey, who are no mugs with the bat. They are a certainty in the playing XI for the second game. Jake Ball, who picked up three wickets in the first ODI, may get a game too.

The only place in the XI which is under some question is that of Rashid. The leg-spinner was hammered for 50 runs off his 5 overs. He may be replaced by Liam Plunkett. Former England captain Nasser Hussain recently gave his team s bowlers a three-point plan to dismiss Kohli through his latest column for The Daily Mail. If England take his advice, Plunkett might feature in the playing XI for Cuttack ODI.

Here s a look at the possible XI England may field in the second ODI: 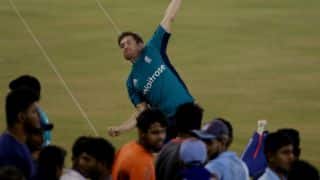