England ended Day Four at 87 for 2 against India, requiring 318 to win on Day Five of the second Test at Visakhapatnam.

The tables were turned yet again on Day Four. England had a slight upper hand over India till the last over of the match when Alastair Cook fell to Ravindra Jadeja soon after Haseeb Hameed had fallen to Ravichandran Ashwin on 75. England thus finished Day Four at 87 for 2, requiring another 318 to win in the second Test in Visakhapatnam. India, who had ruled Day Three with Ashwin s fifer and Virat Kohli s fifty, were bowled out for 204. England were set 405. An injured Stuart Broad came back stronger and set his best figures in Asia with 4 for 33. An inspired Adil Rashid bagged 4 for 82 as well, and India were bowled out within lunch. England’s opening batsmen Cook and Hameed continued their steady stand to keep visitors ahead in the race. Full Cricket Scorecard: India vs England 2nd Test at Visakhapatnam

However, Indian spinners struck to thwart the growing partnership between the opening batsmen, with Joe Root the lone batsman on the crease. India s second innings also saw some crucial tail-ending partnership between newbie Jayant Yadav and Mohammed Shami to take India beyond the 400-run lead. Ashwin, who was on a hat-trick, missed the opportunity as he claimed consecutive wickets of Broad and James Anderson during England’s first innings. Although it was a slow second half, India found ways to add an interesting turn to it claiming 2 wickets in the final session. Here are some highlights from Day Four of the second Test:

Another Virat Kohli special: Kohli has been India’s saviour in this Test amidst the general failure of the top-order (barring, of course, a first-innings fifty from Cheteshwar Pujara). Here, too, he was India’s lone hope on Day Four. Resuming on 56, Kohli eventually finished on 81 to go with his first-innings 167. He had helped India reach 151 for 7 after they had been 17 for 2.

Stuart Broad s strikes early: Broad, who was under the scanner due to injury, was fit and strong beginning the attack on Day Four morning. Broad had already bagged Murali Vijay and KL Rahul on Day Three. On Day Four, he took the honours of dismissing off the resilient Ajinkya Rahane and Ashwin. Broad achieved his best figures in Asia. He underwent a scan on Saturday night. With these figures, he could not have received a better comeback.

Ben Stokes’s outrageous catch: Kohli and Jadeja looked settled at the crease. India had secured a 351-run lead, and England desperately needed to break through. Rashid tossed one up. Kohli hit it very hard, and the ball was travelling so fast that it was almost past Stokes at first slip when he started moving. Eventually Stokes held it after the ball had crossed him, that too one-handed and airborne.

Adil Rashid s whirlwind spin: Just a few series ago Rashid was not even on the radar of Cook. Knowing that Indian conditions favour spin, Rashid could not have found a better platform to stamp his authority. Finding inspiration from the Broad at the other end, Rashid bagged 4 big wickets including Kohli and Wriddhiman Saha.

The rest were of Jadeja and Umesh Yadav, who could have been the potential danger men for England. He may have blossomed in the subcontinent, but can Cook continue to show faith on Rashid at home? With these figures, Cook might want to re-think on this budding spinner.

The Jayant Yadav-Mohammed Shami show: When India called in Jayant as a replacement for Amit Mishra, eyebrows were raised and questions were cropped up leaving out an all-rounder who got a fifer in the same venue against New Zealand in the final ODI. However, Jayant shushed the critics and put his batting skills in the forefront. He had complimented Ashwin in the first innings with a 64-run stand. This time he brought the game alive with No. 11 Shami.

Jayant, who was seen as a silent warrior in the first innings, added some spice to the second with more boundaries coming the way as India were in dire need of runs. Shami hit two massive sixes. The pair added 42 in 58 minutes of entertaining batting. Those runs may make all the difference tomorrow.

Alastair Cook, Haseeb Hameed s buoyancy: Cook and Hameed started at snail’s pace, remaining unseparated at tea. Cook reached his fifty in 171 balls, the slowest of his career. The run rate barely went past 1 an over, but they got to their 50-run stand after tea, and ended up adding 75 runs for opening wicket in 50.2 overs.

This was Cook’s second solid partnership with Hameed, playing his second Test. On debut at Rajkot they had another big stand, Cook getting a hundred and Hameed 82.

Ravichandran Ashwin the first to take lead: Ashwin might have missed the opportunity to get to his hat-trick, but was successful to break the opening stand. The ball kept very low and rapped young Hameed on the pad. Ashwin now has 51 wickets this year, and is just 4 wickets away from crossing Rangana Herath s tally of 54.

As for Jadeja, the story unfolded with better climax with Cook s dismissal, who had survived two referrals. 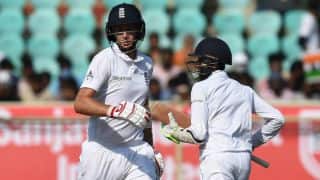 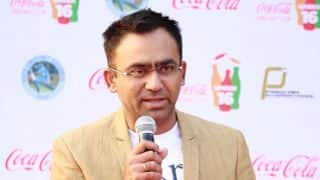