The ICC Women s World Cup 2017 Final was nothing less than an M Night Shyamalan magnum opus. It had the thrill of The Sixth Sense, the suspense of The Village and the disappointment of the ill-fated After Earth. Both India and England embraced a packed Lord s ground in an attempt to capitulate themselves to world glory. England, batting first, were restricted to a below-par 228 with Jhulan Goswami wrecking their famed middle-order. In reply, India were in the hunt till the final 8 overs with 7 wickets in their hand. It required something extraordinaire, and cometh Anya Shrubsole. She single-handedly tore into the India line-up scalping 6 wickets as England went on to win their fourth WC title.

Jhulan removes the middle-order trinity: England were back in command despite being 63 for 3. At the crease were Sarah Taylor and Natalie Sciver, and the Indian spinners were bowling tightly. However, Sarah and Natalie repelled them amidst light showers. Mithali Raj resorted to pacer Shikha Pandey, but the Englishwomen tackled her as well. The only alternative the Mithali now had was Jhulan, and thus began India s fight-back.

The first was not the best of deliveries that Jhulan hurled, but it got rid of the in-form Sarah. Trying to nudge the one going down the leg, she got a faint nick to the wicketkeeper. Off the very next ball, Jhulan removed Fran Wilson with an absolute peach of a yorker. Four overs later she trapped Sciver for 51. From 146 for 3, England were reduced to 164 for 6.

Poonam Yadav spins a web around England: Poonam took two crucial wickets of Tammy Beaumont and Heather Knight with her leg-breaks. While the England captain was trapped lbw, opener Tammy played an uncharacteristic stroke, holing out a juicy full-toss to Jhulan at deep mid-wicket. Having said that, it was Poonam s guile that lured the Englishwomen into playing false strokes.

Inspiring captaincy: The England openers were going great guns, and the first bowling change garnered 12 runs, as Rajeshwari Gayakwad failed to understand the wicket. However, Mithali stationed a short fine-leg and asked Rajeshwari to come over the wicket. Enticed to steer one past fine-leg, Lauren Winfield was completely foxed and was knocked over round her legs. It was more of captain s wicket.

Despite England attacking, Mithali kept mid-on and mid-off up. England were completely caught in her spell, as they managed 228 on a featherbed of a track.

Khiladi Kumar at Lord s: Known to be an avid cricket follower and a supporter of women empowerment in general, Indian film industry s khiladi, Akshay Kumar was found cheering the women in blue from the stands. Akshay, currently in England for his movie s promotion, took a shuttle from Leeds to London to seeing his favourite side in action.

Akshay played a role of a cricketer, who plays for England, his adopted country born to Indian parents. Unlike the movie Akshay is sticking to cheering his own countrywomen from India.

Mithali Raj s bizarre run-out: Known to be a feisty player on the ground, Mithali was found wanting in the middle. Responding to a call from Punam Raut, Mithali meandered her way towards the batters end. A risky single to be, Mithali did not even attempt the dive, let alone dive; she did not even stretch her bat into the crease. Her decision of not putting in a dive was much talked about on Twitter.

Still cant come to terms with the Mithali run out. Looked to have given up.

She will have to answer it all her life to herself. #EngvInd

I know I’m a bit late on the action, but why didn’t Raj at least put in a dive? Its a World Cup final#WWC2017final #effortrequired

Punam-Preet alliance: With India in dire need of a partnership, Punam and Harmanpreet Kaur joined hands. The pair played out quite a fierce spell and soon started to pick singles, doubles and even managed to bring out the occasional six, mostly off the bat of Harmanpreet. They reached their 50-run partnership in 78 balls. It was quite a contrasting alliance: while Punam milked runs all around park, Harmanpreet mostly took the aerial route. However, Punam reached her half-century in 75 balls while Harmanpreet took 78. Soon after her fifty Harmanpreet departed ending the 95-run stand as well.

Anya Shrubsole 6-forguides England to WC win: With India cruising at 191 for 3, it needed a Herculean effort from England to win the match. Anya Shrubsole responded and how to her nation s call.

With the well-set Punam in the middle and a plethora of batters to come, India looked all set to lift their maiden title. Anya, however, had other ideas, she ran riot over the middle and late-middle order of India.

Anya started with hunting down Punam leg-before for 86. She followed it up nabbing the volatile Veda Krishnamurthy, who looked to take game away from the hosts, a wicket that had more to do with Veda s eagerness than anything else.

Anya then knocked over Jhulan with a peach of a yorker that even Waqar Younis would be proud off.

India remained in the foray with Deepti Sharma still in the middle. Anya kicked India s hope out of the park, getting the 19-year-old s wicket for 14. She became the only player to achieve so in a World Cup final.

Anya cleaned by Rajeshwari just 2 balls after to lead England to their fourth World Cup glory. The 6 for 46 are now her best ODI figures.

Thus, India went to succumb to the pressure and nerves of playing at a full-housed Lord s as England went to win their fourth title. It is an uphill task, and India Women need you, dear fans 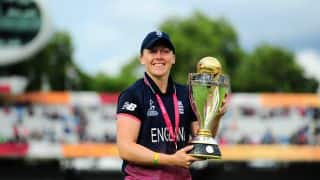