Jake Ball will need to create the magic with the ball and fill the void in absence of James Anderson successfully.

From County Cricket to playing for England s national side, is nothing less than a dream-run for the 25-year-old Jacob Ball (fondly called as Jake Ball). Sharing the space with the likes of his own counterparts Alex Hales and Stuart Broad earlier for Nottinghamshire, Ball has already risen to the occasion with his 5-for on his One-Day International (ODI) debut recently. England are already in a fix with the absence of their major players like Alex Hales and bowling spearhead James Anderson for the India tour. In such state of affairs, it comes to the budding talented cricketers to break the ice and prove their stance. Full Cricket Scorecard: India vs England 1st Test at Rajkot

England have an interesting line-up with one side comprising of comeback man Gareth Batty after 12 years and then it zeroes down to Ball, who will be playing his second Test after topsy-turvy Pakistan Test debut at Lord’s. It was then he filled the shoes for Anderson and it will be now that he can fill the void in Anderson s absence. But very few are aware of Ball s connection with cricket since earlier days. It does not just stop there; his rise has opened the gates for waves of praises from cricket greats. There is an interesting story on how Ball connected with the ball .

The French connection, Under-19 days and County Cricket:

There are rare moments one finds past connection with present in cricket. In England, it is a very old story. One will easily find England players, who have had a brother, father or uncle with some correlation with First-Class cricket and moved to the Test level. Ball has somewhat a similar story. Bruce French, also former Nottinghamshire player, was the wicket-keeper for 16 Tests and is also the present England wicketkeeping coach. That is just professional, but he also happens to Ball s uncle. So the Nottinghamshire connection also falls into place. According to Uncle Bruce speaking to telegraph.co.uk, Ball was a hard-hitting all-rounder. Bruce himself believes he has inherited his mother s genes and went for the role of wicket-keeping, thanks to the height.

Ball was lucky to hail from an extended family that thrived on cricket. Ball has been trained and nurtured by his coach Andy Pick, also former fast bowler. He moved so fast that he soon became part of the Under-19 team for the national side. He started playing for Under-19 s from 2010 and he became a teen sensation after bagging 5 for 64 against Sri Lanka at Scarborough, setting up England to victory. That s not the end. Much before his Under-19 cricket days, Nottinghamshire happened to Ball. At the end of 2009, he made his debut against Sussex and was spot on claiming the wicket of Sussex batsman Rory Hamilton-Brown; but he was one of the victims of Dwayne Smith s hat-trick with the bat.

The First-Class cricket took place in 2011 and Ball stamped his authority successfully then with figures of 3 for 72 in the second innings for Nottinghamshire. He has been pursued mostly for one-dayers and impressed many in 2012, when he was duly rewarded Player of the Year and was also given one-year contract extension. But he found his winning ways in 2013, when in the YB40 tournament Nottinghamshire cruised to the semi-final stage, thanks to Ball s 4 for 25. That was his best figures in senior cricket then. He was hardly aware of the many more records he was to break with his entry in ODIs for the England s senior team.

Injury kept him away most of the thereafter, but his success with the white-ball kept him ahead in the race in 2015. That s when he grabbed the eyeballs of former cricketers, who persuaded Ball to be included in the England senior squad for Test. His recent hat-trick against Middlesex already brings down chills down the spine from the youngster.

When opportunity knocked the door of Jake Ball

In an interesting conversation with ESPNCricinfo.com, Ball remembered how he came under the notice of England senior coach Trevor Bayliss. Ball was loitering in the corridors of the stadium after busy game for Nottinghamshire. That s when he bumped Bayliss and Ball remembered the words that he uttered Carry on what you are doing for Notts and see where it takes you. On the very same day, Ball was astonished to receive the news from England selector s chairman James Whitaker on his call up in the Test squad for Sri Lanka series. His expression said it all, I had just had a chocolate tart from the Lord’s lunch which I nearly chucked up over Whitaker.

But it was not just the England selectors who found something extraordinary about the 25-year-old. Cricket great Kumar Sangakkara and Ball s Nottinghamshire partner Broad hailed him. Ball was appreciated by these Test veterans after his performance in the County Championship Division One as he soared to the wicket-takers list with 19 at 21.15 in just four appearances for Nottinghamshire then. Broad believed, he was one of the quickest-improving bowlers, after playing with Ball for almost three to four years.

Ball surged to the 12-man squad for the Sri Lanka series after his 39-wicket haul in County cricket. Ahead of the Sri Lanka tour, a thrilling contest between Yorkshire and Nottinghamshire ended with Ball proving to be victorious with figures of 7 for 125. Well, that included scalping priceless wicket of his current teammate Joe Root, twice. Interestingly, Sangakkara himself has been victim to Ball s dangerous bouncers against Surrey in April 2016. Ball ended then with figures of 5 for 98. Sangakkara hailed how Ball can bowl both round and over the wicket with ease at this age.

After all the praises and appreciations, Ball was finally called as the 12th man for the Sri Lanka, where he did not play a single match. But luck shone on the youngster, with Anderson s injury against Pakistan. He made his debut in Mecca of Cricket, Lord s. Though he ended with figures of 1 for 51, he was content with this debut for the national side.

He continued to roar in the Championship and grabbed 49 wickets in just 11 games. Ball proved he was a bowler with international quality and that surged him to the ODI squad for Bangladesh tour. It was nothing less than a fairytale for Ball. He became the first Englishmen to secure 5-for on debut and helped England win the first ODI of the series. He continued to rule throughout the series. That was indeed his ticket to fame.

With the know-how about the subcontinent conditions that mostly favour spinners, Ball has a lot on his hands. Absence of Anderson does not only loom around Ball but also builds on the task on the other bowlers. A seamer option is needed and the competition is tough around Ball as Broad, Steven Finn and Chris Woakes can pose threat, if he stands any chance to make his presence felt through his performance.

He has experienced being the 12th man earlier despite Test call up.

This is India. Ball has the right attributes like pace, bounce and talent to bowl both round and around the wicket.

Ball will need to create the magic with the ball and fill the void of Anderson. 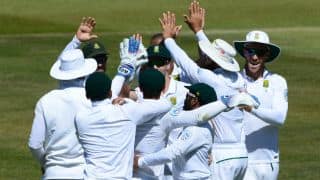