After pretending to shed a tear or two for the hapless bowlers in the era of brutal batsmanship, let us have a look at the report card for the Englishmen in the series.

Another ten runs would have taken the aggregate for the India–England ODI series to 700 runs per match, in other words, seven runs an over across a 150-over contest. Things have reached an extent that when England scored 321 at Eden Gardens and defended it they actually called it a low-scoring match. This was hardly surprising, given that England had gone past the 350-run mark twice in the series and ended up as the losing side. After pretending to shed a tear or two for the hapless bowlers in the era of brutal batsmanship, let us have a look at the report card for the Englishmen in the series. Full cricket scorecard: India vs England, 3rd ODI

Jason Roy (9/10): Easily England s player of the series, Roy showed how dangerous a batsmen he could be irrespective of circumstances. He used his feet brilliantly, moved in the crease to make bowlers go astray, and never let the pressure get to him. Three fifties in three matches, all of them at strike rates over 110 (but below 120) bear testimony to his immense potential. Loses a point for not being able to convert any of his starts to that big hundred England needed badly.

Ben Stokes (9/10): Stokes failed with bat and ball at Cuttack (though he took two excellent slip catches), but his blistering fifties at Pune and Calcutta helped England pile up those big scores. He also took five crucial wickets in these two matches, four of them top-order.

Chris Woakes (8.5/10): To finish a series this high-scoring with an economy rate of 6.39 is no joke, and Woakes had executed his role to near-perfection. He went for 5.5 at Pune, jolted India in the early overs at Cuttack (and finished with 4 for 60), and bowled four dot balls to defend 6 from 4 balls at Calcutta after smashing a 19-ball 34.

Eoin Morgan (8/10): The most dangerous aspect about Morgan s batting is his ability to remain unnoticed while scoring. For example, neither his 26-ball 28 at Pune nor his 44-ball 43 at Kolkata created an impact, but they were crucial nevertheless. The magnum opus came at Cuttack, where an unfortunate run out prevented him from pulling off one of the most spectacular chases in history.

Moeen Ali (7.5/10): When people discuss this series a year down the line they will probably not remember exactly what Moeen did in the series despite a strike rate in excess of 130 and an economy barely exceeding 6 in a high-scoring contest but then, that has been the story of Moeen s career. He played two blinders at Pune and Cuttack, and went for less than 6 an over at both Cuttack and Kolkata. Some day England will figure out the perfect role for this man. Does not get any point for lending his shirt to Chris Jordan.

Joe Root (7.5/10): Root got two fifties in two innings before missing the third due to a groin injury. Root batted intelligently, especially during the 100-run second-wicket stand with Roy in the second ODI, but just like Roy he failed to convert any of his fifties to a big score, especially at Cuttack.

Jonny Bairstow (6.5/10): England s batting depth meant that Bairstow could only play once two men had to be left out. He continued with his excellent form on the tour, getting a well-paced 56 and adding 84 with Morgan. Gets half a point for causing hilarity when he consulted Buttler for DRS for a caught-behind appeal.

David Willey (6/10): Willey had the strangest of series, playing all 3 matches but bowling only 13 overs. He got both openers at Pune, was mysteriously not given more than 5 overs (despite an impressive economy rate) at Cuttack, and hobbled out after bowling 2 overs at Calcutta though not before taking a wicket. He also hit a remarkable one-handed six off a slower delivery probably the shot of the series for England.

Jake Ball (3.5/10): Ball did well in bursts, getting 3 crucial wickets at Pune and 2 more in Kolkata, including an excellent penultimate over that went for only 7. He did not exactly bowl poorly, getting crucial wickets when it mattered, but ruined it with an ordinary show at Cuttack. Loses a point for dropping Kohli at Kolkata.

Liam Plunkett (3.5/10): Plunkett took 3 expensive wickets from 2 matches, though, to be fair, Kohli was dropped off him at Kolkata. Gets half a point for the cameo at Cuttack.

Sam Billings (3.5/10): Billings innings at Kolkata was effective yet ineffective: while he made sure the middle-order was not exposed to some quality new-ball bowling, it cannot be denied that he also wasted balls. That half a point is for two easy but crucial catches.

Jos Buttler (2/10): England s most dangerous limited-overs batsman flopped in the series. Gets a point for catching five top-order batsman, the most brilliant being the leaping effort to get Virat Kohli at Kolkata.

Alex Hales (0.5/10): Hales failed twice, and a fractured hand did not give him a chance to make amends. There were three boundaries in the second ODI, but he did little beyond that in the series. 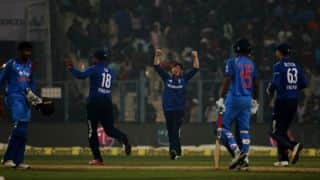 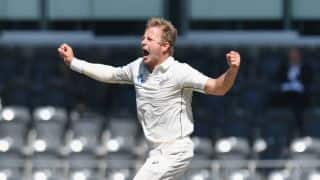