From another big opening stand to some smart Kiwi bouncers, the key phases of the second ODI.

Rohit Sharma and Shikhar Dhawan are India’s second most successful opening act in ODIs after world record-holders Sachin Tendulkar and Sourav Ganguly, but it had been ten innings since they had managed to put on 100. Since they addd 201 against Pakistan during the Asia Cup in September, the pair managed one fifty-plus stand (71), three single-digit starts and two in the forties. (READ MORE: Big bats, spinners put India up 2-0)

Dhawan, no doubt emboldened by his unbeaten half-century in the last game, sped to 66 from 67 balls and Rohit dominated with 87 off 96. Both were cut off going for their shots, but a stand of 154 had laid the groundwork for a match-winning total.

At a venue with small boundaries and notorious for big scores – the last two ODIs at Bay Oval this month produced over 1300 runs – the use of the short ball from Trent Boult and Lockie Ferguson proved key in denying Rohit a 23rd ODI century and cutting off Virat Kohli and Ambati Rayudu in the forties. Earlier in the Indian innings, Ferguson had been pulled for two sixes by Rohit when he opted to bowl quick. (AS IT HAPPENED: INDIA vs NEW ZEALAND)

The first ball of Boult’s third spell accounted for Kohli, who on 43 was hurried into a pull shot that sent the ball to Ish Sodhi at fine leg. On 47, Rayudu became the third batsman to fall to the bouncer, as Ferguson pushed him back and collected a massive top-edge himself.

3. Dhoni rolls back the years

At 236/2 with Kohli and Rayudu at the crease and 11 overs to go, India looked on course to get 350 but their dismissals threatened to unravel the innings. MS Dhoni‘s three fifties in a Man-of-the-Series performance in Australia this month all came in chases, after wickets had fallen. How would he fare today, with India batting first on a ground where New Zealand regularly post 300-plus for fun? (READ MORE: Nine-year-old Indian girl joins Kohli and at toss)

Up stepped Dhoni with 48 not out off 33 balls – a strike-rate of 145.45 – with five fours and a pulled six off Boult. His running was of course excellent as usual, but what stood out was the power in the boundaries. Dropped on 29 by a running de Grandhomme at third man, Dhoni shovelled his way to 48 and took his batting average in ODIs this year to 241.

Back in New Zealand’s limited-overs plans since the start of 2019, Doug Bracewell is hopeful of making it to the Blackcaps’ World Cup squad. Though he went wicketless across ten overs that cost 59 runs today, a sparkling maiden ODI fifty has underlined his value as a handy allrounder. Recalled for New Zealand’s home series against Sri Lanka earlier this month, as an allrounder, Bracewell was not used in the three ODIs but slotted back when India landed. He claimed 1/23 in the first ODI and in the second, smashed five fours and three sixes in making 47 from 46 balls in what proved the highest score of New Zealand’s 234.

Needing something special to keep himself in the reckoning for the World Cup, Bracewell’s maiden ODI fifty has come at the right time.

The leading wicket-taker of 2019 with ten wickets in four ODIs, Kuldeep Yadav once again proved more than a handful for New Zealand’s batsmen. His introduction began with a watchful few overs before he got stuck in. First to go was Tom Latham who missed a sweep to a clever faster delivery, and when de Grandhomme walked out and started heaving, Kuldeep slowed his place and had his one-time IPL team-mate caught at deep midwicket.

He then found himself on a hat-trick as Henry Nicholls carved to backward point and Ish Sodhi was bowled first ball, and though it was not to be, Kuldeep left his mark with 4/45. 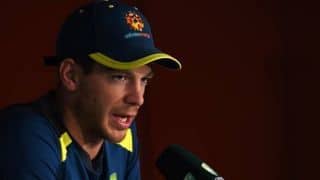 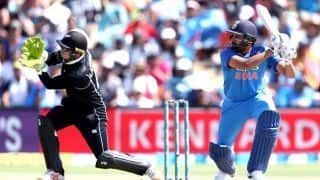