After the first Test at Green Park, Kanpur, the New Zealand in India Test series is in ‘Advantage: Team India‘ stage as they prepare for the second fixture. Virat Kohli‘s India have had a positive start to the series with a 197-run victory over Kane Williamson’s New Zealand. Though the captain failed to continue with his brilliant limited-overs form in Test cricket as well, the good news is that the team has been in good runs. On the other hand, New Zealand are battling a number of injuries and a rather fragile-looking batting line-up. Well, batting was not the only factor behind India’s win in the series opener.

The bowlers expectedly played a crucial role in the first Test. Playing in India, a challenge every batsman dreads is facing the home side spinners. India, thanks to the conditions they play round the year, have traditionally had a strong spin contingent and the current team is no exception. The strength of bowling, irrespective of the venue, depends a lot upon the availability and form of Ravichandran Ashwin and Ravindra Jadeja. Ashwin, the most experienced and successful of the bowlers in the current squad, is the pillar of the bowling looking at the conditions India are playing at, while Jadeja has been equal to the challenge.

The hosts must have been happy walking into the second Test at Eden Gardens, Kolkata. One of the most iconic grounds. Eden Gardens has traditionally helped spinners. Looking at the highest wicket-takers at the ground, the top three of them are spinners. Harbhajan Singh with 46 wickets, Anil Kumble with 40 and Bishan Singh Bedi with 29 are the three names who have been the most successful at the venue, followed by Kapil Dev and Javagal Srinath.

Now let us have a look at the current trend of fall of wickets.

The first match is a prominent example of why the Indian spinners engineered the victory. In the first innings as India batted, the ratio of spinners to pacers bagging wickets is 1:1. Trent Boult took 3 wickets while Neil Wagner bagged 2; on the other hand, Mitchell Santner bagged 3 wickets while Ish Sodhi and Mar Craig picked up a wicket each to equalise in number with the pacers.

In the second innings, as the match progressed on second day, Mohammed Shami went wicketless and Umesh Yadav picked up one wicket. On the other hand, Ravindra Jadeja and Ashwin together dismissed the rest of the nine batsmen with Jadeja pulling off a fifer. The Indian ratio thus read 9:1 in favour of spin.

India declared their second innings on 377 for 5; all 5 wickets were taken by spinners. The final innings was yet another Ashwin show, as the champion scalped 6 wickets, reaching the 200-wicket mark in a breeze. Jadeja picked up 1 while Shami got 2. Of the 34 wickets claimed by bowlers, thus, only 8 were claimed by the seamers.

While India must be thinking of having an extra advantage as they step out at Eden Gardens. While the ground has traditionally helped spinners, there may be some special elements for pacers this time, with both the first new ball and second. While the overcast (probably) early morning conditions may make the new ball do a bit, the afternoon breeze from the direction of River Hooghly has often provided assistance to swing bowling in the dying stages of a day’s play.

To understand this, one must know that the drier and dustier the pitch, the better it is for the spinners to bowl on. The reason being the higher drag coefficient that affects the pace of the ball, the slower the pitch becomes and assists spin as the match progresses. At this part of the year Kolkata’s weather generally remains partly cloudy with a lot of direct sunlight acting towards a drier ground as the day approaches, this year the trend has been different. Over the past few days, Kolkata has had frequent showers, and forecasts of scattered thunderstorms loom over the ground as New Zealand seek an equaliser. The ground has remained under covers. One can expect a tinge of grass, though possibly not much; this also means there will be assistance for pacers towards the beginning. With the weather acting on, the pitch will be more moist than usual. The grass and the moist pitch both decrease the drag coefficient, helping the ball carry on with the pace.

Talking to PTI, Sourav Ganguly said: “It (the Eden Gardens pitch) won’t turn from day one. This is the first match of the season on this wicket. There’s moisture still left in the pitch so it will depend on the amount of sunshine it gets. But there will be spin as the match progresses.”

Pitch curator Sujan Mukherjee assured: “The wicket is in good condition. We just need some sunshine to prepare the wicket through rolling. The grass has been trimmed. This will not be the first time we will have to go through this sort of a situation. The Test in Kanpur is also being played on a fresh wicket. But I can assure you our wicket will be better than the one at Green Park.”

Kohli, too, added in his latest press conference: “It is not a wicket we often see in Kolkata. However, it is a good batting wicket. If we have good runs on the board, we can create pressure on the opposition irrespective of the pitch.”

Indian batsmen have traditionally not been outstanding players of pace bowling. Despite the absence of Tim Southee, New Zealand were able to bag 5 wickets with the help of their pace attack including that of an in-form Kohli. If conditions change, with situations recovering towards five rainless days, India are safe to go for batting if they win the toss. Probabilities are there that they get to a good start with good runs on the board, Eden Gardens  traditionally being a good batting pitch. However, if the wicket remains moist, New Zealand, with Wagner and Boult, will have a slight more advantage bowling first and have good chances of scalping early wickets, causing India fatal damages. With Santner in a very good form as well, as the day starts assisting the spinners, India will have more to worry about.

However, ray of hope for India is Mohammed Shami, who has displayed disciplined spells and has decent experience of playing at the venue due to the amount of domestic cricket he has played there. India may also consider picking Bhuvneshwar Kumar ahead of Umesh Yadav because of the former’s proficiency with new ball under helpful conditions. 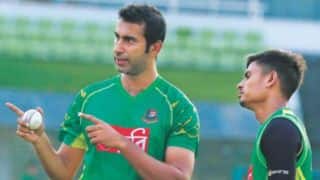