Here are some intriguing statistical facts from Day 3 of the third Test between India and New Zealand at Holkar Stadium, Indore.

Day three of the third Test between India and New Zealand started with visitors’ score of 28 for no loss. Both the Kiwi openers Tom Latham and Martin Guptill were able to score some runs together for the first time in the series. Soon, they completed their 100-run stand and became first opening pair in this series to do that. At one point, it looked like they are going to match India‘s effort but just before the lunch, they lost their first wicket in the form of Latham, who scored 53. In the next session, Kiwi batting line-up collapsed in front of Ravichandran Ashwin‘s spin bowling as they were five-wickets down for 148.

Further, Jimmy Neesham played a handy knock of 71-run but after his wicket, New Zealand were shortly bowled out for 299. India gained lead of 258 runs but they decided not to give follow-on to New Zealand as they came out to bat. Opener Gautam Gambhir retired hurt after hurting his right shoulder and at the end of day three, hosts were 18 for no loss of wicket with the lead of 276 runs. As the third day was also full of statistical records, Abhishek Kumar presents few such interesting facts from Day three of this match.

2. Latham and Guptill added 118 runs for the first-wicket. This is the first hundred plus opening stand by any opening pair so far in the ongoing series. Also, this is the fourth highest opening stand for New Zealand in an innings of a Test in India after Richardson and Vincent (231 in 2003), Matt Horne and Gary Stead (131 in 1999) and Brendon McCullum and Tim McIntosh (125 in 2010).

3. Experienced Kiwi batsman Ross Taylor got dismissed for a duck. This was his 12th duck in Tests and third most by any New Zealand batsman between one to six batting position in Tests after Stephen Fleming (16 ducks) and Ken Rutherford (16 ducks).

4. Ashwin became fourth Indian bowler to have 20 or more five-wicket hauls in Tests after Anil Kumble (35), Harbhajan Singh (25) and Kapil Dev (23). Also, this was his fifth five-wicket haul against New Zealand, which is most by any Indian bowler and fifth most overall after Ian Botham (6), Dale Steyn (6), Derek Underwood (6) and Wasim Akram (6).

5. Ashwin’s 20th five-wicket haul came in his 39th Test. He is now third fastest to have 20 five-wicket hauls in Tests after Sydney Barnes (25 Tests) and Clarrie Grimmett (37 Tests).

6. At the end of New Zealand’s batting, Ashwin scalped six wickets and this was his ninth six-wicket haul in Tests, which is third joint-most by an Indian bowler in Tests after Kumble (19), Harbhajan (13), BS Chandrasekhar (9) and Kapil Dev (9). Also, with six-wickets in this innings, Ashwin surpassed Ishant Sharma in terms of wickets. He has now 213 wickets and is the eighth highest wicket-taker among Indian bowlers.

7. Latham and Rohit Sharma are the only batsmen to score fifties in each match of this series.

9. After a good start by the openers, New Zealand collapsed and lost their first five wickets under 30 runs. From 118 for none, they were reduced to 148 for five.

10. Taylor continues his poor form in Tests. This was the eighth consecutive innings for him without any fifty plus score. Infact, Taylor hasn’t been able to touch even 40-run mark in last eight innings. His last fifty plus score came against Zimbabwe during the second match at Bulawayo in August 2016, where he made unbeaten 67.

11. Last time an overseas opening pair added 100-run for first wicket in India was Ed Cowan and David Warner, during the third Test in March 2013.

12. New Zealand skipper Kane Williamson was once again dismissed by Ashwin. This is the third consecutive time Ashwin got Williamson’s wicket in Tests. Overall, Ashwin has taken his wicket four times in Tests. 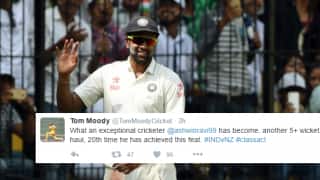