The pitch showed some signs of deterioration towards the end of the second session on the second day at Kanpur.

By Devarchit Varma and Aditya Sahay

India continued to have a poor first Test of their big home season, as they were pummelled by New Zealand on the rain-truncated second day at the Green Park Stadium in Kanpur on Friday. New Zealand were placed at a very strong position of 152 for 1, after bundling out India for a modest first-innings score of 318 in their first innings. New Zealand were trailing by 166 runs when rains interrupted the proceedings right at the beginning of the final session, forcing the umpires to call off the day and ask for an early start on the third day of this opening Test. The third day of this Test will now have 98 overs, with the match slated to begin at 9.15 AM IST.

It has been a terrific game so far for New Zealand, as they produced a strong batting show on the second day. Their out-of-form opener Martin Guptill looked good throughout his brief stay, as he was the only batsman to be dismissed in their first innings on the second day. New Zealand captain Kane Williamson and opening batsman Tom Latham slammed unbeaten half-centuries, putting their side in firm control of this Test at Kanpur.

Williamson and Latham have so far added as many as 117 runs for the second wicket, and if New Zealand are able to knock of India’s lead of 166 runs in the first innings, the hosts may have a very tough time getting back into the contest. One or two strong partnerships may actually put New Zealand in command, but they are far off from winning this Test as there still is a lot of hard work to be done by both the sides. FULL CRICKET SCORES: India Vs New Zealand, 1st Test 2016, Day 1

The pitch showed some signs of deterioration towards the end of the second session on the second day, which means, the Indian bowlers, especially Ravichandran Ashwin and Ravindra Jadeja, will have a big role to play. They would have got some good amount of rest with play ending at least two hours early on Day Two from the scheduled finish, and both Ashwin and Jadeja will come back hard on the Kiwis’ batsmen on Day Three. It will be important for India to take wickets in heaps and that too in quick succession, as any strong partnership will hamper their chances to be in the drivers’ seat in this Test.

Earlier on the second day, India were bowled out for 318, with Jadeja being stranded at 42 not out. Murali Vijay top-scored with 65 runs whereas Cheteshwar Pujara managed 62, Rohit Sharma played hard for his 35 off 67 balls whereas Ashwin continued from where he had left in his successful tour to West Indies. India captain Virat Kohli had already disappointed with his 10-ball 9. Rohit, however, again played a reckless shot and got dismissed at mid-on off Santner’s bowling. Wriddhiman Saha joined Ravichandran Ashwin in the middle but Saha fell without opening his account. Boult got his first wicket to dismiss India’s wicketkeeper-batsman. He came back strong and ended with three scalps as he dismissed Ashwin and took the last wicket of Day One sending Mohammed Shami back to the hut. ALSO READ: Tendulkar: See this batch representing India for next 10 years

Umesh Yadav and Ravindra Jadeja started off Day Two with some work in hand. They were expected to add some vital runs down the order and get the team past the 300-run mark. India managed to sail past 300 in style as the duo added 41 runs which enabled them to reach 318.

Still the total was not that big and India were expected to bowl well to restrict the Kiwis. Guptill and Latham started off well but Guptill got out for 21, with the score at 35. He was outdone by Yadav who trapped him for a start. Williamson came out to bat with a purpose. He looked nonchalant in his innings and kept the scoreboard ticking. New Zealand played Ashwin and Jadeja well as they went to lunch with no further damage.

After the first session, India could not manage to get any further wicket. Latham and Williamson played the ease and patience against India’s premier off-spinner, Ashwin. The duo played the sweep shots with effective results. Shami, Yadav and Ashwin were a bit expensive whereas Jadeja was the most difficult bowler for the visitors with an economy rate of 2.76. After the pair had added 117 runs, rain played spoilsport for a good amount of time with covers on the field.

The last inspection was at 15:30 IST after which the umpires decided to call off the proceedings. New Zealand were 166 runs behind at the stroke of interruption with nine wickets still in hand. India have had a tough time in the game after the first session of Day One. They struggled from 154 for 1 to 318 all-out. In reply, New Zealand were at 35 for 1 but remained with one wicket down reaching a respectable total.

Latham was batting on 56 whereas Williamson was at 65 not out. The pair will like to add more misery to the hosts’ bowling attack when play resumes on Day Three. However, rain is predicted for the remaining three days as well which might change the plans of both the teams. New Zealand will like to be aggressive and get to India’s score quickly and then get a handy lead. India, on the other hand, have their task cut out.

Rain interruption has helped them a bit but still they will have to get their act together with the red cherry. India will have to get early breakthroughs or else New Zealand will run with the match, if not interrupted much due to rain showers. Overall, there is still a lot in store for both the teams on Day Three which will keep the viewers glued to the series opener. The pitch has shown some signs of assisting spin bowling, and with a fresh approach, both Ashwin and Jadeja would want to start afresh and try to get India back into the contest. 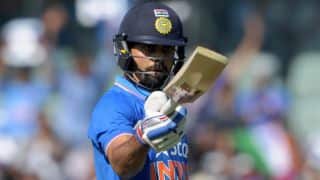