The first match of ICC World T20 2016 between India and New Zealand was too short a game to assess what was actually wrong: the wicket or India’s batting.

Glenn Maxwell did not call this pitch ‘diabolical’. But Ben Stokes for some reason termed it worse than the ‘astro turf pitch with cigarette burns on a length at my old school’. Certainly, England, Australia and every single side that struggles against spin traditionally would have closely followed the India versus New Zealand T20 World Cup 2016 opener. Who knows, they may come across one of such tracks sometime in the tournament. India may have massacred South Africans the last time they played at Nagpur, but they were dished out similar treatment at the same venue. This throws up a pertinent question: what was worse? The VCA Stadium pitch in Nagpur or India’s batting?  Full Cricket Scorecard: India vs New Zealand, ICC World T20 2016, Match 13 at Nagpur

The answers could be divided equally in the favour of the two options. The pitch had a lot for the spinners. Mitchell Santner spun the ball more dangerously than India’s star spinner Ravichandran Ashwin. Santner was not hit for a six throughout his four overs, while Ashwin was clobbered for two in his first four balls. With bat New Zealand crawled to 126 for 6, which proved way too many for India, who were bowled out for mere 79 in 18.1 overs. The top-scorer of the game, Corey Anderson, made a laborious 42-ball 34, studded with 3 boundaries.

It was too short a game to assess what went wrong, the wicket or India’s batting. New Zealand would not have thought that a modest target of 127 will be more than enough for India. And on their part, India would have laughed had they been told before setting out for their chase that they will be shot out for 79 in 18.1 overs. ALSO READ: New Zealand spinners rip India apart by 47 runs in ICC World T20 2016, Match 13 at Nagpur

The debate over the pitch at Nagpur may continue to rage on, especially with ICC giving a mandate that it had to be a batsmen-friendly deck. Despite instructions, both New Zealand and India struggled to score runs, had long spans in which boundaries were not hit, and sixes became rarity in a T20 game.

As rare as an overseas Indian win in Test cricket. Really.

It is a fact that India batted horrendously, but so did New Zealand. Kane Williamson decided to bat but he was the first one to struggle. He consumed 16 balls opening the innings for his side, managing to pierce the fielders at cover only once, by luck. Corey Anderson swung and got too many inside edges. None of them fortunately crashed into his wickets. The rest did not bat long enough with which their struggles could be determined.

India looked in a hurry when they were chasing. Rohit Sharma was lazy. He played two risky strokes in air that landed safely. He ventured out of the crease to hit Santner without having middled a single stroke, and it will makes you wonder what exactly he was trying to do. Suresh Raina’s trait of moving across the crease always has the possibility of the ball taking the leading edge. Shikhar Dhawan has been inconsistent for far too often to list out his mistakes.

It will be a shame if critics jump the gun, and compose another piece on MS Dhoni, terming him a spent force. Dhoni tried to weather the storm — there was none actually. He tried to hold fort from one end and launch an attack when the storm had passed. But the trouble was invited by the Indians for themselves, with soft dismissals of Raina, Yuvraj Singh and even Virat Kohli hurting them hard. Dhoni ran the risk of running out of partners, which eventually happened.

There are no doubts that Nagpur pitch for this game had vicious turn, and had this been even a one-day contest, the venue might have ended up attracting further wrath of the cricket fraternity. But Indians spoiled their own party with poor show with the bat. 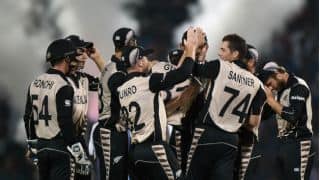