With the India vs Pakistan match upon us which looks to be another thrilling contest, it will not be wrong to anticipate that there is another big knock in the offering by Virat Kohli.

Riding high on confidence, the Indian cricket team will face their arch rivals on Saturday night: the unpredictable Pakistan in the fourth match of the ongoing Asia Cup T20 2016 tournament at Dhaka on Wednesday night. This will be the first time since February 2015 (when they had locked horns in ICC Cricket World Cup 2015) that India and Pakistan will be taking on each other on cricket field, and there will be equal pressure on both the cricket teams to register a win. India’s big-match player, Virat Kohli, who had a forgettable outing in their first match, can be expected to go all guns blazing against Pakistan. Live Cricket Scorecard: India vs Pakistan, Asia Cup T20 2016 Match 4 at Dhaka

Back in 2014-15, after a fantastic run in the four-Test series in Australia wherein he smashed as many as four centuries, Kohli’s bat went quiet. He struggled in the triangular series that followed, with India not paying enough heed to the series as they wanted their players to take a break mentally and not burn themselves out ahead of the ICC Cricket World Cup 2015.

Kohli too did not push a great deal and instead went on a short break with the Indian Team Director Ravi Shastri, as the two important men knew there was a massive challenge ahead of them. The move to take a short break amid poor form did not instil much confidence in the Indian cricket fans and those concerned, but it turned out to be a masterstroke. ALSO READ: India vs Pakistan: Top 6 matches in Asia Cup

Kohli bounced back with a splendid century — the first match for India in ICC Cricket World Cup 2015 was against Pakistan and the Indian-captain-in-making led from the front. Kohli came in to bat at his familiar No. 3 position, and did not go bonkers against Pakistani bowler. Instead, he adopted a calmer approach and stroked 8 boundaries to score 107 runs off 126 balls. Kohli’s century played a vital role in India’s big win by 76 runs in the all-important clash. ALSO READ: India vs Pakistan, Asia Cup 2016, 4th T20I at Mirpur: Virat Kohli vs Mohammad Aamer and other Key Battles

Now with the two teams gearing up for another thrilling contest, it will not be wrong to anticipate that there is another big knock in the offering by Kohli. He has had his mandatory break — Kohli was rested for the series against Sri Lanka — and has seen enough of the conditions in Bangladesh. He flopped miserably in the first match, and it can be expected from a played of Kohli’s stature to make necessary amends.

The Bangladeshis surprised India by dishing out a green-top wicket, and their bowlers did extremely well to not bowl in the areas where Kohli can go for his famous drives. The Indian champion was forced to play the wrong shots, and Kohli struggled with the timing and placement of his strokes on most of the deliveries that rose sharply on him. While Bangladesh managed to hold Kohli back with this strategy, it is unlikely that Pakistan will too dish out the same and Kohli will go down without a fight. 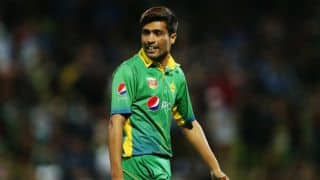 India vs Pakistan, Asia Cup 2016: Will Mohammad Aamer be a threat? India vs Pakistan, Asia Cup 2016: A statistical look at the past encounters between the arch-rivals