Quashing all the critics, Pakistan flattened India by 180 runs in the final and lifted their maiden Champions Trophy title, at The Oval. This and other top episodes in CricketCountry's highlights of the day.

India could not defend the title. Captain Virat Kohli could lead India to their maiden ICC title. His men could not annihilate Pakistan the way they did exactly 2 weeks ago. The tides turned and so drastically. Pakistan, who had entered ICC Champions Trophy 2017 as No. 8 team in rankings, emerged at the top. Quashing all the critics, Pakistan flattened India by 180 runs in the final and lifted their maiden Champions Trophy title, at The Oval. This and other top episodes in CricketCountry’s highlights of the day. Full cricket scorecard: India vs Pakistan, Final at The Oval

What do you think? #CT17 pic.twitter.com/JUdkec8nbI

No-ball wicket: In the corridor of uncertainty and Fakhar Zaman induces an edge to MS Dhoni. Jasprit Bumrah starts celebrating Pakistan’s first blood and umpire signals no-ball. That was it. Curtains were down on India’s campaign, for what followed was an innings of genius.

Fakhar rises to the occasion: Zaman was on 3 when he got the reprieve. That, or anything, did not stop him from playing one of the finest innings, on an occasion such as final of an ICC flagship tournament. Only the second youngest to play in a final, Zaman knew no pitfalls of a counterpunch. He danced down the track. He reverse-swept. He heaved so ugly that a No. 10 batsman would have had a wry smile. However, whatever he did worked for Pakistan. The intent to dent India’s confidence put Pakistan well ahead in the race. He scored his third consecutive 50-plus in only 4 games, eventually going on to score his maiden hundred.

Fakhar Zaman’s maiden ODI century powers Pakistan to 338/4 in the Final of #CT17. Will it be enough?https://t.co/Cer70pIRoh #PAKvIND pic.twitter.com/rv5UeyBssS

Fortune favours Pakistan: The no-ball was the start to Pakistan’s series of dumb luck. Every miscued shot fell in no man’s land. Indians, who usually are exceptional fielders, could not hit the stumps. Believe it or not, even Ravindra Jadeja misfielded once. In hindsight, Sri Lanka had dropped three catches off Lasith Malinga, one of which included a dolly that Thisara Perera had difficulty holding on to. Pakistan weaved magic with the same potion of luck, and scripted history.

Azhar Al ‘s uncharacteristic knock: Usually, Azhar goes by the conventional norms of the game. He does not shimmy and wham it down town. That said, Zaman’s brand of cricket seemed to have rubbed off on Azhar. He smashed 6 fours and a six to lace 71-ball 59.

Pakistan’s new opening duo: Neither did Pakistan miss Sharjeel Khan nor Ahmed Shahzad. They now have the veteran Azhar and his new, young comrade Zaman. They registered their consecutive 100-plus stand of the tournament. However, they got out in a traditional Pakistan mode of dismissal: run out.

Hafeez joins the party: Promoting Shoaib Malik at No. 4 when Pakistan were going all guns was not a surprise. To keep the run rate up, Mohammad Hafeez had to bat down the order. For that matter, he is not known for his using his long handle and sending the ball soaring over the boundary line. However, the scenario was different, perhaps the same as Azhar’s. Hafeez went bonkers. He blasted unbeaten 57 off 37 including 4 fours and 3 sixes.

Bhuvi stands out amidst rampage: Jasprit Bumrah and Ravichandran Ashwin went for 7 RPO as well as wicketless. Jadeja was even worst, leaking over 8 RPO. Hardik did well in the middle overs, finishing with 1 for 53. However, Bhuvneshwar, despite Pakistan going full throttle, was exceptional. After his first spell, his figures read 5-2-10-1. Although he was sent to the cleaners in the death overs, he still ended with 10-2-44-1.

Aamer packs The Big Three: Before this match, Rohit Sharma, Shikhar Dhawan, and Virat Kohli had faced 909 deliveries compared to Yuvraj Singh, MS Dhoni, Kedar Jadhav, and Hardik Pandya’s 151. While Dhawan was at the top of the list of highest run-scorers, Rohit followed him at No. 2 and Kohli 4. This was discernible to the fact that these three were India’s bet in the final. It could take a herculean task to dismiss them. However, Mohammad Aamer made a mockery of task. He dismissed the trio in his first spell, leaving them aghast with pace and swing.

Pandya’s carnage give India a glimmer of hope: Pandya hit a six, then another, then another one until Pakistan kept bowling full on his legs, under his chin. He kept hitting left, right, and centre, and so mindlessly. The elevation got higher after every six, and a few of refused to fall off the orbit. The fans, who had their heads down, were on their feet chanting for their team, silencing Pakistan’s roar. All thanks to Pandya. He bludgeoned 76 off 63 comprising 6 fours and 4 sixes. Such was his carnage that a few actually believed that India would pull off the improbable, but came the run out that left Pandya livid at Jadeja. Pandya even slammed the boundary line with his bat in disgust.

Hassan Ali and his 3-fors: Hassan Ali bagged his fourth consecutive three-wicket haul, dismissing Dhoni, Ashwin, and Bumrah. He was named Man of the Tournament for his spectacular performance. 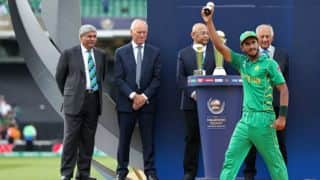