According to the ICC Women’s Rankings, Pakistan are on No. 7, while India sit on the fourth place behind the likes of Australia, England and New Zealand.

India are off to a great start after their convincing 72-run win against Bangladesh in the opener of ICC Women’s World T20 2016 at Bengaluru on Tuesday. Barring Smriti Mandhana, other India Women contributed with the bat. Smriti, who was India’s regular opener and was pushed to No. 3 against Bangladesh, lasted only four deliveries and was dismissed without scoring a run. Although the Indian Women failed to bowl out their opponents, they managed to restrict them to a mere 91 runs in 20 overs, an effort that was enough to seal the first match by a huge margin. However, the next side that awaits Team India is Pakistan— a match that will always pose a pressure-cooker situation. FULL CRICKET SCORECARD: India vs Pakistan, Match 7, ICC Women’s World T20 2016 at Delhi

According to the ICC Women’s Rankings, Pakistan are No. 7, while India sit on the fourth place behind the likes of Australia, England and New Zealand. While India won their opening match of World T20 2016, Pakistan Women began their campaign with a loss in the hands of West Indies. So, to stay alive in the tournament it is important for the Women in Green to win the match against India. Although Pakistan bowled well against West Indies — Pakistan restricted them to 103 — they failed with the bat. Bismah Maroof’s 22 was the top-score before they fell short of 4 runs eventually. Meanwhile, Mithali Raj will mostly prefer an unchanged playing XI when they lock horns with neighbours and arch-rivals.

Top-Order: Mithali, Vanitha VR and Smriti fill the top-three spots of India’s top-order. The skipper has been seen swapping the positions of Vanitha and Smriti off late before finalising Vanitha as her opening partner in the World T20. In the recent home series against Sri Lanka where the sides played three T20Is, it was Smriti who finished as the top run-scorer with 83 runs from 3 innings. On the other hand, Vanitha only had 51 runs to her name from the same number of innings. It was just one poor match for the 19-year-old Smriti, and she will want to get back to her high-scoring ways against Pakistan.

Middle-Order: The likes of Harmanpreet Kaur, Veda Krishnamurthy, Jhulan Goswami and Anuja Patil make the all-important middle-order of Team India. While Harmnapreet and Veda are fixed at Nos 4 and 5, the intensity of the situation decides whether Jhulan or Anuja must be sent at No. 6. From the duo, it is Jhulan who is more experienced and has delivered with both bat and ball at numerous instances. Since her debut in 2006, the 5-foot-11 tall cricketer has been a key member of the squad with 315 runs from 50 matches along with 44 wickets as well.

Veda on the other hand has 310 runs in her account from 27 T20Is. Although she is yet to prove her worth in numbers in the T20 format, her maiden World T20 campaign was off to a decent start with the cameo of 24-ball 36 under pressure against Bangladesh. India will want more of those knocks from her in similar situations and one such instance might be waiting against Pakistan.

Lower-Order: Shikha Pandey, Poonam Yadav, wicketkeeper-batswoman Sushma Verma and Rajeshwari Gayakwad form the lower order. Poonam has an experience of six World T20 matches so far with 12 scalps from them. She is India’s second-highest wicket-taker overall in the tournament, playing two world T20s (2014 and 2016). The spearhead easily being Jhulan, the likes of Shikha provides support with her medium pace. The spin options lie in Anuja, Poonam and Rajeshwari, who will be handy on these Indian conditions. Although only Poonam and Anuja managed breakthroughs against Bangladesh in the opening match, the others managed to keep the runs down. 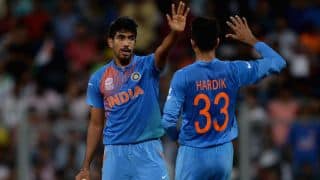