South Africa, after the success achieved in Tests, went down in the limited-overs leg of the series versus India. India led their revival with their emphatic third Test victory at Johannesburg. Surely, South Africa’s side were hampered with constant injures to key players, but India were to strong for them overall. The three-match T20Is was closely fought, but South Africa went down courtesy India’s all-round bowling skills. Let us analyse the JP Duminy-led squad’s performance in the three outings.

Jon-Jon Smuts (16 runs) – 2 out of 10- Smuts was relied to provide some flourishing starts to the side along with Reeza Hendricks. Nonetheless, the right-hander was a non-performer throughout the series. He got out to India’s seamers before the end of the first Powerplays; depicting his woeful time.

Reeza Hendricks (103 runs) – 4.5 out of 10- Hendricks began on the right note. He maintained his composure and changed gears swiftly during the first T20I run-chase. Losing the top-order soon, Hendricks began the onslaught along with Farhaan Beherdien. He attacked Yuzvendra Chahal and Jasprit Bumrah, before perishing to the Bhuvneshwar Kumar. His maiden fifty was the lone fighting cause in a tall chase.

Hendricks, however, failed to get going in the preceding encounters. He got starts but perished without making a mark.

JP Duminy (122 runs) – 7.5 out of 10- Duminy was in-charge of a young side without the likes of AB de Villiers, Quinton de Kock and Faf du Plessis. Duminy did his best to carry the team’s responsibilities on his shoulders. While he failed in the series opener, Duminy was calm and composed as ever in the second T20I run-chase. He allowed Heinrich Klaasen to play freely, and saw the team get past the finish line with an unbeaten 64. In the last encounter, Duminy again led the charge with a swift 55 wherein he commenced the acceleration following a slow start.

Duminy, overall, led from the front with the willow. His bowling changes were decent, and pushed the team to keep the series alive after reeling 0-1. He stressed upon the penultimate encounter as a semi-final to lift the spirits of the dressing room.

Heinrich Klaasen (92 runs; 4 catches) – 8 out of 10- Klaasen was the find of the series. With many T20 franchises always on the look-out for such attacking and expressive stroke-makers, Klaasen has surely arrived. He was at par with his wicketkeeping skills, and destructive with the bat. The right-hander commenced with a brisk cameo, 8-ball 16 in the series opener, and bettered his efforts with a 30-ball 69 outburst (strike-rate of 230). He single-handedly resulted in India keeping Yuzvendra Chahal out from the tour finale courtesy his blitz. Chahal finished with the worst bowling spell by an Indian (4-0-64-0) at Centurion.

Had Klaasen cleared mid-off in the third T20I, he may have led South Africa to a series-win. Such was his devastating form.

David Miller (38 runs)- 1 out of 10- When the senior players are out of the side, one relies on the fairly experienced players to rescue the side. Miller had a chance to be the man of the moment in two stiff chases, and finish the match in the penultimate tie. He failed in every occasion. Miller, opening for the first time in his 227th innings, the left-hander managed a scratchy 23-ball 24. Total failure!

Farhaan Behardien (70 runs)- 6.5 out of 10- A 27-ball 39, 10-ball 16* and a 6-ball 15* aren’t bad numbers for sure. Behardien’s strike-rate was 144, 160 and 250 respectively. He played the second fiddle perfectly to Hendricks and debutant Christiaan Jonkers in the first and third T20I. Behardien looked comfortable whenever he came out to bat, and guided the younger lot.

Andile Phehlukwayo (13 runs; 2 wickets)- 3 out of 10- Phehlukwayo was ordinary with both bat and ball. He got two scalps, in form of Shikhar Dhawan and Suresh Raina, and managed 13 off 8 balls in the only outing with the bat. His economy rate never crossed over 9, but wasn’t given a full spell in any of the games. Under-used or ordinary? Debatable.

Chris Morris (4 runs; 3 wickets)- 2 out of 10- Morris’ case is similar to Miller’s. Being an experienced campaigner, more was expected of Morris. He accounted for 3 scalps and remained expensive in the series. On the other hand, he was a complete failure with the long handle.

Junior Dala (7 wickets)- 9 out of 10- Dala was the joint-highest wicket-taker along with Bhuvneshwar. He bowled in right lines and hurried the batsmen with extra pace. Along with accounting for Virat Kohli, MS Dhoni and Raina’s wickets, he made Rohit Sharma his bunny dismissing him on all occasions. In addition, Dala improved his economy rate after going for plenty in the first match.

Tabraiz Shamsi (2 wickets)- 5.5 out of 10- Shamsi is an experienced T20 bowler having represented various franchises in several leagues. He got two wickets in form of Kohli and Raina, and put a lid on the scoring barring the penultimate tie. Nonetheless, he loses out marks on sloppy fielding throughout the series. He needs to work on his fitness as well.

Christiaan Jonker (49 off 24 balls) – 8.5 out of 10- Debuting in a series decider, and coming out to bat when the required run-rate was already over 12, Jonker had no choice but to go all-out from ball one (In short, Jonker had to go bonkers. Sorry, couldn’t resist). His temperament was tested, but the newbie responded by attacking Shardul Thakur and experienced duos Bumrah and Bhuvneshwar. Accounting for 34 runs in the run-up to the last over, Jonker almost pulled off a heist. He scores more owing to his mindset and attacking instincts.

Aaron Phangiso (economy rate of 6.5)- 5 out of 10- Phangiso came in for Paterson. He was introduced into the attack after a handy stand between Raina-Dhawan at Cape Town. He did his job reasonably by restricting the run-flow. Phangiso bowled only two overs and gave nothing away apart from one loose delivery. Fair enough? 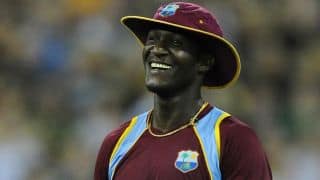