It seems that Akshar Patel has eclipsed Amit Mishra in the race for India’s reserve spinner for the tour of Australia and maybe even the World Cup. While Karn Sharma got his One-Day International (ODI) debut in the previous game, he was expensive and got a token wicket. Shiamak Unwalla examines whether Akshar merits his extended run.

A year ago, if one were to say that Akshar Patel would be leading India’s spin attack in a home series against Sri Lanka, the responses would be those of amusement or disbelief; or in some cases, the question, “Who?” And yet, that is precisely what occurred in the fourth ODI at Eden Gardens.

While Akshar had either Ravindra Jadeja or Ravichandran Ashwin to bowl with from the other end in all his previous matches, this time around he was the one performing the role of the senior spinner for debutant Karn Sharma.

In Akshar’s short career so far, he has impressed with his accuracy and ability to contain the batsmen, while also managing to take wickets. In the eight ODIs he has played so far, he has captured 12 wickets at an average of just 19.91 and a strike rate of 26.5, figures that are impressive by any stretch.

Barring that, he has also shown a brief glimpse of his batting prowess. He has a batting strike rate just shy of 200 in three innings. This will certainly go down with time, but he has shown the ability to bring out the big hits. His domestic record as an all-rounder is also striking: 45 wickets in 34 List A games at 27.42 and a strike rate of 37.4 to go with a batting average of 27.27 and a batting strike rate of 100.82. He is also a superb fielder and catcher.

The problem with Akshar is that he is too similar a cricketer to Jadeja that would allow them both to play together. Both men rely more on restricting the batsmen rather than extracting great turn. Both men can whack the ball coming in lower down the order, and both are superb athletes in the field. Unfortunately, that means that India’s bowling attack runs the risk of being one-dimensional if they both appear together.

However, his record does make a compelling case. Mishra and Karn Sharma might just be able to give a good account of themselves if they are given a few more opportunities, but Akshar’s superior all-round skills could see him pip the competition to earn a berth in the coveted 15-member squad for the ICC World Cup 2015. It remains to be seen what the future holds for these three spinners, but the evidence points to Akshar making the cut. 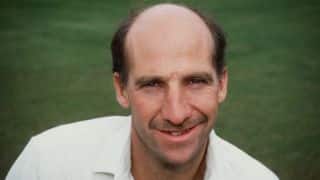