Rayadu, Rahane and Raina are in contention for the number three spot.

India’s No 3 position saw a change as Ambati Rayudu walked ahead of Virat Kohli in the second One-Day International (ODI) against Sri Lanka. While Rayudu’s success is reassuring, Abhijit Banare argues that India’s No 4 position still remains open with months to go before the World Cup.

After the mandatory first powerplay during the chase of 275 in second ODI, Ambati Rayudu looked a touch rusty while his partner Shikhar Dhawan was struggling to find the gaps. The moment Dhawan crossed his fifty, the duo played breezy knocks and looked in a completely different mode compared to the way they started. Dhawan has been under scrutiny for a while but it was a crucial match for Rayudu. He has played some gritty knocks in the past but he had often thrown his wicket away than getting out to good balls.

In the absence of Rohit Sharma, Rayudu has played a fair number of matches to prove his mettle and to his credit the average of 48.58 shows he has lived up to the expectations. India’s team composition looks more or less set ahead of the ICC World Cup 2015. Yet there could be a little shuffle once Rohit returns to the team.

With his success in the warm-up match, there’s little doubt that Rohit and Dhawan will be India’s preferred choice to open the batting in limited overs. This leaves a little dilemma as to who will follow Virat Kohli in the batting order.

Who bats at No 4? Rayudu, Ajinkya Rahane and Suresh Raina are the three players for the No 4 and No 5 spots. While Raina continues to bat at the latter position, it shouldn’t be a surprise if the team looks to alter the position and bring him back at No 4. In the 18 innings at No 5, Raina averages 46.15.

During the high-scoring home series against Australia, Raina was drafted in at No 4. MS Dhoni appeared confident of Raina’s abilities and had already marked him as the potential No 4 in the team for the World Cup. But that series once again exposed Raina’s shortcomings against the short-pitched bowling.

In the subsequent months, Raina ended up losing his limited overs spot, let alone occupy the key position of batting at 4. He seems to have completed a full circle as he returned to the Indian squad and showed that all the shortcomings were a thing of the past and since then has looked in sublime touch in all the matches.

With Raina in good form, it wouldn’t be far-fetched to think that he would be drafted in to pace the innings after Kohli.

On the other hand, it would be a tough choice to decide between Rahane and Rayudu for the middle-order, as both have scored well in the recent past. At the same time, both have been susceptible in certain areas. The No 4 & 5 positions can be  tricky ones as the batsman has to assess the situation and shuffle between caution and aggression. Raina has so far done an exceptional job since his return to the squad which may be a reason to keep him at No 5 and decide the fourth spot between Rayudu and Rahane.

It would be interesting what  the batting combination is  from the fourth ODI onwards when Rohit is likely to make his return. Apart from the two matches, the real test will be the series in Australia. The response of the batsman to those conditions is likely to give a clear picture as to what India’s middle-order would look like in the World Cup. 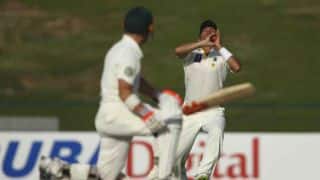