India in 2016 has won eight out of the nine Twenty20 International (T20I) matches they have played.

The seventh match of the Asia CupTwenty20 (T20) 2016 was played between India and Sri Lanka at Dhaka. India won the toss and opted to bowl first. Indian bowlers bowled well in first 11 overs and gave just 57 runs, taking 4 wickets but after that with the help of Chamara Kapugedera and MilindaSiriwardana’s contributions’ and cameos from Thisara Perera and Nuwan Kulasekara, Sri Lanka managed to post a target of 139 runs. In reply, India did not start well and lost their two wickets inside 4 overs but then Virat Kohli and Suresh Raina played well. After Suresh Raina’s steady knock, Yuvraj Singh came in and made 35 runs from 18 balls and with Kohli’s consistent performances in this year, India won their eighth match out of their nine matches in 2016. By winning this match with 5 wickets, India has also guaranteed their place in this year’s Asia Cup final. With this match, once again several records entered in the record books of cricket in this format of the game. FULL CRICKET SCORECARD: India vs Sri Lanka, Asia Cup 2016, Match 7 at Dhaka

13 – Number of Wickets taken by Ashish Nehra in T20Is in powerplay overs which is second most by any Indian bowler. R Ashwin with 14 wickets is at first place in the list. Today, Nehra picked up a wicket of Sri Lankan batsman Dinesh Chandimal in the 3rd over.

9 – Number of Wickets taken by Ashish Nehra in powerplay overs since January 1, 2015 from 9 matches which is most by any other bowler in powerplay overs. R Ashwin with seven wickets from 11 matches is at second place in that list.

2nd – MS Dhoni became 2nd wicket-keeper in T20Is who has claimed more than 50 dismissals. Today against Sri Lanka at Dhaka,he claimed 3 dismissals. Kamran Akmal of Pakistan with 60 dismissals is at first place in that list.

88.89 – Win Percentage of India in 2016 which is best among other teams who have played minimum 5 T20I matches this year. This year, India have won 8 matches from 9 matches.

9– Number of Wickets Ashwin has picked in T20Is when Suresh Raina has taken a catch. They have the most bowler/fielder combination wickets in T20Is. Pair of Ashwin-Rohit and T Gugten-P Borren are second on the list with 8 wickets each to their name.

1st – MS Dhoni became 1st captain who has hit 200 sixes in international cricket. While Ricky Ponting is at second place in that list with 171 sixes and Brendon McCullum is at third place with 170 sixes.

5 – Number of Players in T20I cricket who have hit same number of fours and sixes among players who have hit at least 5 sixes in their career, These five players are Yuvraj Singh (68), Abdul Razzaq (21), FawadAlam (7), R Mutumbabi (7) and G Hopkins (5). 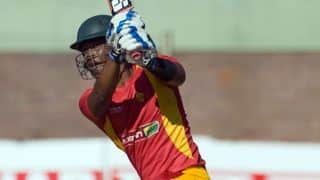