Angelo Mathews’ unbeaten 139-run knock took Sri Lanka to a total of 286 in the stipulated 50 overs. He made this off only 116 balls as he took the Indians bowlers apart. Varun Arora looks back at the innings.

Dhawal Kulkarni ran in to bowl the fourth delivery of the 47th over grinding his shoes deep on the ground. Mathews took a deep breath as he slammed his bat down on the brownish mat repeatedly, waiting for Kulkarni to spray the ball in. His anxiety was understood. He was batting on 98 off 101 balls and waited to reach to his first century in One-Day Internationals (ODIs). Kulkarni fired in a low full toss towards Mathews and he tapped it in the empty space towards deep mid-wicket and ran two quick runs. Then came the celebration, Mathews jumped two-feet from the ground and thumped his right hand in the air, acknowledging the landmark he had achieved.  In this match, he had earlier reached 1,000 ODI runs. He also became the fastest in this year to reach the figure.

Each of his teammates were up in the dug-out. Whispers of claps resonated in the stadium. Mathews had fought for his team single handedly. He had previously amassed an unbeaten 92 at Ahmedabad, 75 at Kolkata and now an unbeaten 139 at Ranchi.

Mathews came out to bat when Sri Lanka were batting at 73 for one in 14.4 overs. He went ballistic after he reached  his half-century. The last 89 runs he scored came just off just 40 balls. At one point when Sri Lanka looked only capable of reaching near 220, Mathews stepped up with his authoritative approach and went beserk against the Indian bowlers.

Here is list of the highest run-getters in the year 2014:

In his innings of 139 at Ranchi, Mathews had hit 10 sixes, all against spinners. He was murderous against Ambati Rayudu as he caressed him for 29 runs from the 12 balls he had faced from him. Karn Sharma also was hit for 14 runs off just three balls in the 46th over.

The first six came off the the third ball. Karn Sharma bowled a good length delivery and Mathews went down on one knee and dispatched the ball over long-on into the stands. Sharma bowled a similar delivery and this time the ball hit inside of the bat and went over deep square-leg for another six. Out of his 139 runs, 100 runs came on the on-side. 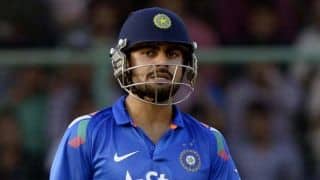