Mathews's ability with both bat and ball makes him any captain's dream player in T20s.

Angelo Mathews has quietly gone about his job at the ICC World T20 2014. Nishad Pai Vaidya writes about Mathews’s utility in the Sri Lankan unit.

Angelo Mathews, the all-round cricketer is a perfect foil for Twenty20 (T20) cricket. While Mathews the batsman is in prominence in the longer version, T20 has given him a chance to hone his all-round skills to good effect for his nation. In the ongoing ICC World T20 2014, Mathews has been one of the key performers for Sri Lanka and he is a captain’s dream in this format. With the burden of leadership off his shoulders, he can express himself and put in all his powers into his own art.

There is an air of dependence when Mathews walks out to bat. In this shorter format, he is needed when Sri Lanka have either lost too many wickets upfront or need the him to calmly manouvre the innings to the slog overs and then power the late surge. For such contrasting situations, you need a man with a very cool head. Here is someone who can be overshadowed by the heavyweights in the form of Mahela Jayawardene, Kumar Sangakkara and Tillakaratne Dilshan; not to forget the young Kusal Perera. But, the value Mathews brings is unparalleled.

In this tournament, Mathews has been able to script those important knocks lower down the order. The semi-final against the West Indies is a case in point. Mathews came in when Sri Lanka had lost wickets in the middle and he had to wade them through that phase. And he did it quite sensibly. Watching him bat, one didn’t feel he was taking too many risks. For a major part of his innings, he was unnoticed as he knocked it around for singles and twos. But, when the slog overs approached, he very smartly unleashed his scoring rage. He punished every delivery in his zone and also turned the strike over.

A very pertinent feature in Mathews’s batting is the way he deals with yorkers. He digs them out with the toe end of his bat, making a little room by moving towards the leg-side. That is something that helps him deal with the pressure as it turns the yorker into a scoring opportunity. Apart from that, he also uses his feet to good effect against the spinners and doesn’t try too many fancy things, playing good cricketing shots all along.

When it comes to bowling, Mathews takes the pace off the ball. On slower surfaces in Bangladesh, it isn’t easy to get him away. Plus, he gets that little movement in the air. The Sri Lankans have normally used him upfront with the new ball, leaving Lasith Malinga for the latter part of the innings. Mathews is more useful with the new ball, when he can get that little movement and pitch it around the off-stump. Later in the innings, he may not be your best bet and that is when Malinga comes in.

Mathews has been a part of the Sri Lankan team that lost in the final of the 2009 ICC World T20 and the 2012 edition. In the last final, he was dismissed in an embarrassing manner when he tried to scoop the ball over fine-leg and was bowled. This time, Mathews would hope to put in a performance, like he did in the 2009 final, but of course, in a winning cause. 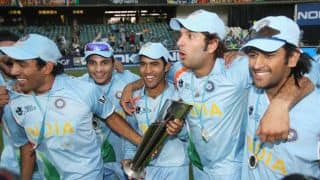