The penultimate group match of Asia Cup T20 2016 will see a dominant India take on a spirited UAE cricket team, at the Shere Bangla National stadium in Mirpur, Dhaka. India will like to put another convincing display to add up to their impressive record of 8 wins in 9 T20 Internationals (T20Is) this year. UAE, on other hand, have nothing to lose. The side was knocked out of the tournament with three back to back losses. Yet, a spirited performance against a strong Indian side will give them heaps of confidence going ahead. Following are the key duels which may influence the result of this game. LIVE CRICKET SCORECARD: India vs UAE, Asia Cup 2016 Match 9 at Dhaka

Amjad Javed vs Virat Kohli: The veteran UAE captain has had a brilliant tournament so far. Javed’s 8 wickets in 3 matches have played a huge part in the limited success UAE have had so far in the Asia Cup 2016. But in the game against India, Javed will face a humongous challenge against Virat Kohli. Nothing is going wrong for Kohli at the moment. His last 5 T20 International score reads, 56 not out, 49, 7, 59 not out, 90 not out. And for India, if Kohli gets in his stride, it may well be tough day for Amjad Javed and his team.

Shaiman Anwar vs Jasprit Bumrah: The UAE top order has failed miserably in this Asia Cup 2016. The only good thing in the team’s campaign has been Shaiman Anwar’s batting. Coming at No. 4, Anwar showed in the last game against Sri Lanka his batting ability with an innings of 46. But he will be facing a bowler who has given Indian fans a reason to cheer. As awkward his action is, Jasprit Bumrah makes sure to put the ball on the right areas. If UAE has any chance of getting good score, it is necessary that Shaiman Anwar is at his best against Bumrah and co. ALSO READ – Asia Cup T20 2016: Yuvraj Singh: Happy with the flow

Mohammad Usman vs Ravindra Jadeja: It’s a battle of the southpaws.. If UAE are to win this game, they will rely heavily on Mohammad Usman to get them runs in the middle order. A player with a bit of form on his side with three 30+ scores in last 5 innings, he will have to be wary of Ravindra Jadeja’s bowling. A player who is lightning fast in field and can chip in with the bat, Jadeja is primarily in the side as fourth bowler due to his ability to ball length to length giving no space to the batsmen. If Jadeja gets going, it will be very tough for UAE batsmen to score runs in the middle overs.

Mohammad Naveed vs Hardik Pandya: Primarily a bowler, Mohammad Naveed has shown some heart with his batting as well this Asia Cup 2016. Apart from taking 4 wickets in the tournament at an economy rate of less than 7, he has also contributed a bit for his team with the bat. On the other hand, Hardik Pandya finally seems to have settled in the side. On his day, he can blast the ball out of the park, like that against Bangladesh, and can get the team wickets when needed. It will be interesting to see which of the two players can give their team the balance in the match and win them the game.

Swapnil Patil vs MS Dhoni: Another player of Indian origin, , Swapnil has been a regular in this UAE side since 2014. A wicket keeper who can bat, considering he scored 99 not out on his ODI debut, Patil is yet to find his batting stride in T20 format. If UAE are to get quick runs in the end, it will be important for the 30 year old to play his part. On the other end, India have  MS Dhoni in their side.   Although Dhoni has been trying far too many things with the bat, he still has the ability to power one out of the ground. 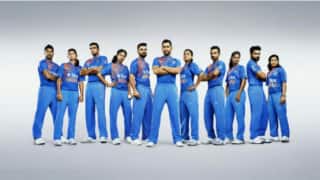