While West Indies seized the first session, the Indians fought back and gained a firm grip over the match by the end of day’s play. Abhijit Banare looks at the key events that unfolded on Day Two of the first Test. 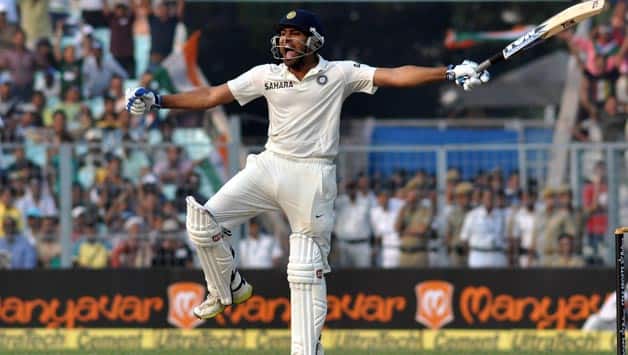 While West Indies seized the first session, the Indians fought back and gained a firm grip over the match by the end of day’s play. Abhijit Banare looks at the key events that unfolded on Day Two of the first Test.

It was an event waiting to happen — a West Indian spinner and not a pacer turning out to be the strike bowler. Saqlain Mushtaq would be proudly smiling having pinned Shillingford as the best among the spinners. The off-spinner rattled the batsmen with his variation and also the assistance from the surface.  Shillingford completed 50 Test match wickets having dismissed Murali Vijay. While Tendulkar went for a contentious decision, there was no doubt that the batsman had misread the doosra completely.

In the latter part of the day, the bowler was switched to the Pavilion End and he went for runs. Surely he had more teeth to his spin from the High Court End. Bowling from round the wicket also allowed Rohit and Ashwin to sweep and collect runs on the leg-side. Sammy though wasn’t proactive in delegating the bowling responsibilities. Shillingford bowled 37 of the 90 overs i.e. 41% of the bowling despite having five bowlers in the team. Shane Shillingford (above) picked up four wickets, including that of Sachin Tendulkar © IANS

One of the best reasons why an Indian fan would hate an umpire is most likely because of a wrong decision. And if it happens to be against Sachin Tendulkar, there is absolutely no way you could walk through the streets and expect a warm greeting. Officiating in his 19th Test, Llong sent the Eden Gardens into a deadly silence when he gave Tendulkar out leg-before. The side-on replay did show that it may not have been a great call from the umpire. And Tendulkar’s disapproval while walking back didn’t help either. The real-time social media went abuzz slamming the umpire. And quite predictably, the absence of DRS in India matches too couldn’t stay away from the debate for long! It was not just Indians, even Michael Vaughan expressed his concerns.

India were reeling at 83 for five. While it’s easy to think the unbeaten partnership between Rohit and Ashwin, the platform was set by a confident 42 from the Indian skipper. The way he deflated a charged-up Shillingford with powerpacked shots for boundaries, it allowed India to come out of the shell.  Their 73-run partnership ensured that even if India had slumped to a low score, they would not have conceded a big lead. However, the eventual story was different. Dhoni’s positivity also allowed Rohit to feel much more comfortable. By the time Ashwin came, Rohit had his eye in, but the mindset may not have been same if he had to directly start his innings with the lower order.

It is just a few days after batsmen were thrashing the bowlers on featherbeds and Rohit Sharma was one of them who made a mockery of the Australian bowlers. But the Eden Gardens wicket was a different situation altogether. Not only had India slipped but the pitch too posed enough threat. Rohit finally showed his prowess as top quality batsman by rising to the occasion and that to on his Test debut.

Rohit has already enjoyed a golden run in 2013 and the Mumbai batsman is making it count big time. There can be endless praise on the elegant strokes that he plays and the time he has to execute his shots but what matters is the consistency at which he is executing this gifted talent. If things go as it is now, a double ton on the trot is an easy possibility. He started his young cricketing career as an opening batsman and the confidence hasn’t changed much on the basis of his batting position. Ever since the partnership between him and Rohit blossomed, it was a delight to witness even the singles and twos timed to perfection. With his ongoing innings, he even has a higher Test batting average than Murali Vijay! The off-spinner is inching closer to his second Test ton against the same opposition and in all likelihood can complete the landmark. And if things go his way he is all set for even completing 100 wickets — just six short as now.

Rohit Sharma stamps his class with century on debut