India made it difficult for themselves after losing the fourth ODI at North Sound, Antigua. As a result, West Indies sniffed a series leveller at Sabina Park, Jamaica, a venue they relish playing in. However, there were no surprises on Thursday. Indian skipper Virat Kohli struck his 28th ODI ton as the visitors comfortably trumped West Indies to take the series 3-1. Suvajt Mustafi evaluates the performance of the Indian players.

Rahane waited for his chance. He spent the entire Champions Trophy on the bench. When the opportunity came, he grabbed it: he was India’s most consistent batter in the series and was instrumental in getting the side to good starts. He scored a hundred in the second ODI, and his only sub-fifty score was in the final game where Bishoo dismissed him for 39.

Rahane also took a brilliant catch in the final ODI to send back Shai Hope.

Kohli handled the press with dignity post the Anil Kumble debacle. He let the focus remain on the game as well as led the side with distinction. His 87 at Port of Spain helped India get a vital lead in the series. He, however, fell cheaply in the next 2 games. There were some hiccups, but he rose to the occasion in the final game, slamming a record hundred to help India seal the series. In a series where runs were hard to come by on sluggish surfaces, Kohli maintained a strike rate of over 93.

Kohli now has 28 ODI tons (joint-third most alongside Sanath Jayasuriya) and 18 of those have come while chasing, which again is a record. The previous best was Sachin Tendulkar’s 17.

Rahul Dravid recently emphasised on the need of wrist spinners in ODIs and hinted how Kuldeep’s mystery element could make a difference. What the young Chinaman bowler brings to the table was there for all to be seen. West Indian batsmen found it difficult to read his wrong ‘us. In all, he made a reputation for himself in his debut series.

Kuldeep ended as the joint-highest wicket-taker in the series. He ended up with two 3-fors and one 2-wicket haul. Although he went wicket-less in the final ODI, he gave away only 36 from his 10 overs. To make things interesting, his economy rate was just over 4.

Pandya is the all-rounder India longed for, perfecting fitting the bill. He did not get enough opportunities with the bat but made up with the ball. He troubled Shai Hope with short deliveries and found success against the in-form West Indian. It was also his quick 20 in the fourth ODI that brought India close to a victory.

Pandya as usual was brilliant in the field as well.

Bhuvi continued to be brilliant in the little opportunities he got. In the second ODI, West Indies, chasing 311 from 43 overs, were immediately forced to the back foot after Bhuvi’s 5-1-9-2. He was rested for the final two ODIs to give opportunities to others.

Shami finally got to play an ODI after close to two-and-half years. He bowled well but went wicket-less in the fourth ODI. However, he made up for it with a four-for in the final ODI. Shami got all his 4 wickets in the death overs in Jamaica, which prevented West Indies a decent score. In fact, he dismissed both the set batters Jason Holder and Shai Hope to regain momentum.

Questions remained over Ashwin’s importance in the ODI line-up, but the ace off-spinner enhanced his reputation with a fine 3-for in the third ODI. Ashwin bowled very well in the two opportunities he got, and it seemed he was getting the confidence back. It was surprising that he was dropped (or rested?) for the final two games, making way for Ravindra Jadeja.

Umesh was amongst wickets, finally. He ended up with 7 wickets. His wickets of consecutive deliveries in the final ODI derailed the West Indian batting. He also got a 3-for in the fourth ODI. Though he was expensive when compared to the other bowlers, Umesh’s good show ensured all the Indian bowlers had a good time in the Caribbean.

Jadhav played a couple of cameos but failed in the 189-chase at North Sound, resulting in India’s defeat. He made the opportunities count with his bowling as well, taking 2 scalps. He also took 3 catches.

Making a comeback to the XI after over 3 years, Karthik failed in the Antigua chase. However, he made up for it with his fifty in the final ODI at Jamaica. Karthik’s century stand with Kohli saw India through. We deduct a point from Karthik for his fielding. He failed to get into the groove.

Dhoni did no harm to his batting average, but he did to his reputation. He struggled to finish well in the second ODI. He played a crucial knock in the third ODI, and his painstaking fifty in the fourth ODI cost India the game. He called himself ‘wine’ after his 78*, but it’s fast oxidising. His strike-rate in the series read 71.62

He was brilliant behind the stumps, but in the final ODI he dropped 2 catches that eventually didn’t prove to be too costly.

Jadeja’s hara-kiri in the fourth ODI was amongst the chief reasons for India’s shocking loss. He also went wicket-less in the two that games that he played, but he bowled a miserly spell in the final ODI, giving away 27 from his 10 overs. He continued to be brilliant in the field.

Dhawan’s curious case of falling flat in non-ICC tournaments continues. He started off where he had left in Champions Trophy with 87 and 63, but since then he got three back-to-back single-digit scores. Dhawan gets half a mark for taking two catches in the final ODI.

The question continues to arise if Yuvraj and Dhoni should be in Team India’s 2019 World Cup plans. Yuvraj got an important 39 in the third ODI but failed to impress otherwise. He sat out of the final two games due to a hamstring niggle.

Suvajit Mustafi consumes cricket for lunch, fiction for dinner and munches numerous other snacks throughout the day. Yes, a jack of several trades, all Suvajit dreamt of was being India’s World Cup winning skipper but ended up being a sports writer, author, screenwriter, director, copywriter, graphic designer, sports marketer, strategist, entrepreneur, philosopher and traveller. Donning so many hats, it’s cricket which gives him the ultimate high and where he finds solace. He can be followed at @RibsGully [Twitter] and rivu7 [Facebook].
First Published on July 7, 2017 12:24 PM IST
Last updated on July 7, 2017 12:24 PM IST
TOPICS:
India India tour of West Indies 2017 India vs West Indies West Indies
SERIES:
India vs West Indies 2017 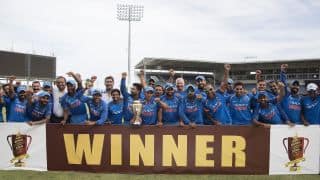 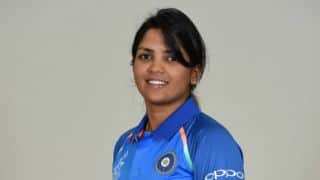 ICC Women’s World Cup 2017: Wanted to make most of the opportunity I received, says Veda Krishnamurthy