If there is one Indian venue that West Indies would probably not want to bowl to Virat Kohli, it is the tongue-twisting Dr YS Rajasekhara Reddy ACA-VDCA Cricket Stadium, on the outskirts of Visakhapatnam, host of the second ODI on Wednesday.

After Mumbai s famed Wankhede Stadium and his home ground of the Feroz Shah Kotla in Delhi, Kohli has scored the most runs in Visakhapatnam. In five international innings there, India s skipper has racked 647 runs at an average of 107.83 including a sequence of 118, 117, 99 and 65 in four ODIs. Kohli s other outing there was Test match versus England in 2016 in which he scored 167 and 81.

That means that in six innings at the Dr YS Rajasekhara Reddy ACA-VDCA Cricket Stadium, Kohli has crossed 50 each time, with three hundreds and three fifties. Narrowed down to ODI cricket, Visakhapatnam is Kohli s most successful Indian ground with 399 runs in four innings there. How s that for staggering?

In his first game there in 2010, an ODI versus Australia, Kohli 118 of 121 balls to set India up for a five-wicket win chasing 290. He was, not surprisingly, named Man of the Match. A year on, Kohli was again Man of the Match for scoring 117 off 123 balls as India beat West Indies by five wickets in an ODI. Nearly two years later, Kohli was dismissed on 99 when he pulled a bouncer from Ravi Rampaul and was well taken by a diving Holder at fine leg in a two-wicket defeat to West Indies.

Coming off a whirlwind and match-winning 140 of 107 balls in the first ODI between India and West Indies in Guwahati, Kohli is 81 runs short of becoming the fifth Indian batsman to score 10,000 runs in ODIs. Given his appetite and exceptional record in Visakhapatnam, it will take something out of the ordinary for West Indies to prevent another big score.

India have won six of seven ODIs in Visakhapatnam. Their only loss there came to West Indies by two wickets in 2013 – the game in which Kohli was dismissed on 99. 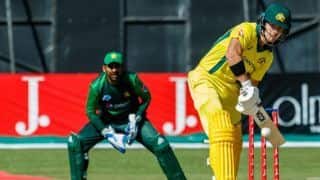 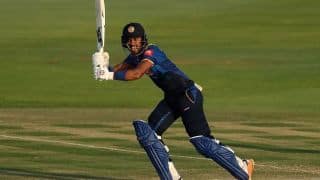 Sri Lanka vs England, 5th ODI Live Streaming: When and where to watch and follow live