India and West Indies meet for 3rd Test at St Lucia, as they battle it out to survive in the four-Test series.

After putting in everything they had, and still having to settle for a draw at Jamaica, India will head into the third Test at St Lucia, with a clear intention of clinching the four-match Test series against West Indies. The hosts, after a spirited batting performance on Day Five of the second Test, did what came as a surprise for everyone watching. After dominating for well over four days, India had still not got the outcome they would have wanted. West Indies, were not at their best, but they just had enough to keep India at bay, and keep the series alive more importantly. As we approach the St Lucia Test, let’s have a look at some key battles that might turn the side in either teams’ favor. FULL CRICKET SCORECARD: India vs West Indies, 3rd Test at St Lucia

Virat Kohli vs Roston Chase: The hero of the second Test, Chase with his unbeaten innings of 137 certainly earned the praise he so deserved, not only from his own team-mates but the opposition as well. Kohli and Anil Kumble while addressing the media did appreciate the West Indies’ fightback of which Chase was the pivot. READ: India vs West Indies: ‘Assert supremacy, own Gros Islet’ mantra for Virat Kohli & co.

But there is one thing we know for sure. Kohli doesn’t like anyone getting in between him and success. There were glimpses of Kohli showing anger at Chase and perhaps a few words were also exchanged between the two. Kohli simply let his feelings known. Although, what might add ‘masala‘ to the battle would be the fact that Kohli was one of Chase’ five wickets as well.

Ravichandran Ashwin vs Jermaine Blackwood: A wily off-spinner against an attacking batsmen with all the strokes up his sleeves, this battle will be perhaps one to watch out for. While Blackwell in his almost T20 like approach counter-attacked the Indian bowlers, Ashwin turned to be India’s highest wicket-taker in the second Test. Not only that, it was Ashwin who dismissed Blackwood in both the innings. In the first innings he trapped the West Indian in front, and in the second he was caught brilliantly by Cheteshwar Pujara at forward-short-leg. It will therefore be interesting to see how this one shapes up.

Cheteshwar Pujara vs Self: Pujara’s plight has been for all to see in the last few Tests. He has got off to starts but has failed to convert them into big ones. What started of as a rough patch, has now perhaps become more of a mental game than anything else, and it has certainly taken a toll on Pujara’s confidence.

In the Jamaica Test, when a half-century would have made him feel better, he misjudged a single and paid the price while getting run-out for 46. That too, after doing all the hard work. With the competition for a place in the top five increasing, it might soon become a ‘now-or-never’ situation for him. If he can win this battle, get a big one at St Lucia, he would have done himself a huge favor.

Anil Kumble vs Phil Simmons: An off-the-field battle, but the coaches with their inputs and strategies would have had their say. Kumble is on his first assignment and if not a resounding 4-0 win, a 3-0 win will be enough to begin his campaign in the Caribbean on a positive note. He would have certainly discussed with Kohli and the team about errors made in the last Test.

Meanwhile, Simmons would have been satisfied with the lower-order’s batting effort to save the Test, he will want to see his bowlers stepping up and making it tough for India’s strong batting unit. It will be interesting to see whose words will have a role to play.

West Indies/ India vs Rain: Perhaps, what looks like the third contender in the series is the rain. It has affected both the Tests in some way or the other. Not only in this corner of the world though, but in almost every corner where Test cricket is being played. England’s second Test against Pakistan at Old Trafford saw rain interruptions, so did the first and second Test between Australia and Sri Lanka.

At St Lucia, rain might cause disruptions as well, but all one can do is hope that it does not! 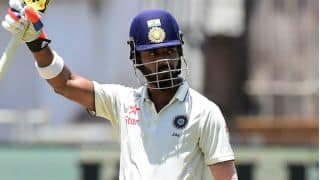