To not have any play possible whatsoever on two days on the trot between India and West Indies , and between South Africa and New Zealand, is something which puts cricket and the men administering it in shame.

The days of uncovered wickets are way behind us. Into the 21st century where the very idea of cricket is contesting modern world, expanding technologies, markets, and even fan bases, the sport is somewhere fighting for its very existence, isn’t it? Yes, to not have one of the most popular sports on the planet featuring in the Olympics is stupefying to many. But then, Olympics without cricket is a norm that many generations have lived with; it cannot change overnight. But what can change, is the way cricket administrators preserve its sanctity. To not have any play possible whatsoever on two days on the trot between India and West Indies at Trinidad, and even between South Africa and New Zealand at Durban, is something which puts cricket and the men administering it in shame. Full Cricket Scorecard: India vs West Indies, 4th Test at Port-of-Spain

Exactly why two very important days of a very important Test were washed out without a ball even being bowled? Why was the entire field, knowing that there will be torrential rain, was left open for rains to spoil it? Why, for a Test organised in the rainy season, there were no super soppers as well as rain covers adequate to cover the entire field?

Should not these two equipments — enough number of super soppers as well as rain covers big enough to cover the entire field of play — be compulsory for hosting international cricket matches? Isn’t the unavailability of these two very important instruments, regressive?

Exactly what happened at the Queens Park Oval in Trinidad — the venue, which has hosted Test cricket since 1930 — is a matter that demands urgent attention from cricket authorities. If cricket, unlike football, cannot be played with rains coming down, why not have the basic necessities as a mandatory feature for all venues to ensure they are in place, before they are awarded international cricket matches?

We are witnessing similar scenes at Kingsmead, Durban. On the first day, under the clouds, New Zealand bowlers made merry. The second day began with South Africa folding up and Dale Steyn — playing in his first Test since December 2015 — snaffling two early wickets in a terrific spell. However, no play was possible post lunch, and overnight rain washed out the first session.

Play in Durban has been delayed. Next ground inspection will be at 12:00. #SAvNZ pic.twitter.com/Wcu3f0bKzv

For cricket grounds to remain largely unaffected by rain, especially if matches are being held in the rainy season, it is imperative to have an excellent drainage system, super soppers and rain covers enough to spread all over the field. If every single venue which gets awarded international cricket, fulfills these basic necessities, not a lot of time will be lost after rains stop and the groundsmen get in action once again to make the field ready for action. ALSO READ – India vs West Indies: India’s success story at Port-of-Spain

But, as much as cricket and its complexities are concerned, this problem is certain to feature among the top five if a list is prepared. Since cricket is being played, rains have played dramatic part in many crucial matches, but that is uncontrollable. What cricket managers and stadium and ground authorities can do — for everyone’s benefit — is to have the basic necessities in place so that play can resume as early as possible once rains subside.

For Test cricket, which is increasingly witnessing dwindling number of fans inside as well as outside stadium, it is unhealthy to have age-old and out-dated methods involved.  But then, Test cricket is not the only caught in the firing line. There are so many aspects of the game, such as the size and the width of the bat, the checking of foot no-ball with the help of third umpire, and so many other issues that demand either immediate change in their present form, or are completely discardable.

The possibility of a repeat at what happened at the Queens Park Oval in Trinidad is exactly the same on any Indian ground. Because the Board of Control for Cricket in India (BCCI) does not mandate the state cricket associations to have at least the rain covers big enough to cover the field. And if the drainage system is concerned, the best in the country is perhaps at the Punjab Cricket Association (PCA) stadium in Mohali, where the excess water goes into the drain connect to the city’s sewer system, ensuring that the water flows out in almost no time*.

The worst has to be the Eden Gardens in Kolkata, where the last Twenty20 International between India and South Africa was washed out in October 2015. The iconic stadium which still has the highest sitting capacity in the country had the worst drainage system, and not enough rain covers to save the outfield and even the bowlers’ run-up in case when it rained.

This is why in SL we cover the entire ground! https://t.co/oRyenU2e96

When it poured in Kolkata ahead of the high voltage India-Pakistan clash in the ICC World T20 2016, another abandoned game was on the cards. Having shifted the venue from Dharamsala to Kolkata due to political reasons, BCCI could not afford to lose out on such a high profile World Cup game. However, it was good to see that despite the heavy downpour, the game took place at the iconic venue. Former Indian captain and the high profile Cricket Association of Bengal (CAB) President Sourav Ganguly ensured the entire ground was covered and himself monitored the progress. In fact, Ganguly made his groundsmen sit on the covers to ensure the wind did not blow them away, and once the rain stopped, play could start immediately. He was lauded for his efforts and an 18-over a side game was ensured. Perhaps better administration or let us say the right administration can make a difference.

Cricket cannot afford to remain stuck in the past. The game’s governing body and some of its wealthy cricket boards have enough resources to ensure there are bare-minimum necessities across all cricketing venues where it is required. For now, cricket is asking change.

* According to a Times of India report. 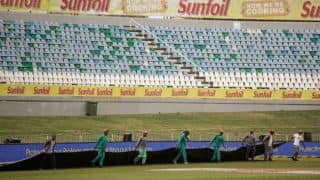