Nishad Pai Vaidya reviews India’s performance in the first One-Day International (ODI) against Zimbabwe. He argues that the new-ball bowlers have to target wickets, although they did well to keep the Zimbabwe openers quiet. Ultimately, it was a big day for Ambati Rayudu even as Virat Kohli scripted a ton. 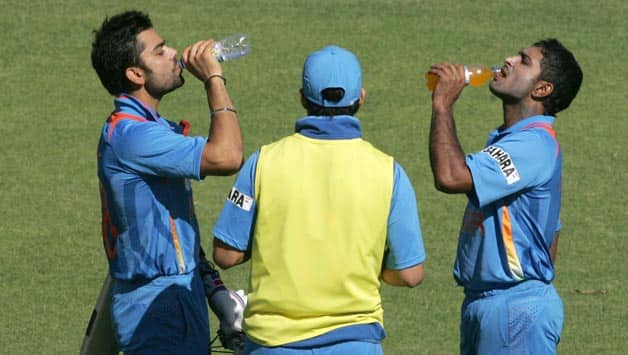 Nishad Pai Vaidya reviews India’s performance in the first One-Day International (ODI) against Zimbabwe. He argues that the new-ball bowlers have to target wickets, although they did well to keep the Zimbabwe openers quiet. Ultimately, it was a big day for Ambati Rayudu even as Virat Kohli scripted a ton.

It was a largely untroubled path to victory for India as Zimbabwe rarely challenged them during the first One-Day International (ODI). There was a lot of talk about how this inexperienced Indian unit would perform given the 2010 sojourn — where a similar under-strength side failed to beat Zimbabwe. But, the bowlers were decent and the batsmen gave Zimbabwe no leeway of getting into the game.

A very pertinent fact is that there is a lot of help for the bowlers early on at the Harare Sports Club. The commentators did mention that during winters in Zimbabwe, there is a little bite in the wicket in the morning and the team that wins the toss should bowl first. The last time India toured Zimbabwe, they were involved in a tri-series — the third team being Sri Lanka. Interestingly, all the contests were won by the team batting second. In fact, in 25 one-dayers in Zimbabwe since May 2010 (including that tri-series), a team batting first has only won six times. That record reflects the kind of advantage the team bowling first has on Zimbabwean wickets. Thus, India had the upper hand the moment captain Virat Kohli called it right at the toss.

The Zimbabwe openers were measured in their approach and watchful during the first hour. Considering the conditions, it was the right way to go about things, but the general consensus is that they left the acceleration a touch too late. Despite the helpful wicket, the Indians didn’t trouble the batsmen a lot although they had a hold over proceedings. Shami Ahmed and Jaydev Unadkat have good analyses to show, but picking wickets would be crucial. Kohli did say at the presentation that India’s bowlers did a good job upfront, but they have to make inroads and dent the opposition.

R Vinay Kumar, the most experienced bowler of the lot, got a bit of stick. India have had him in their plans and this is a full series for him after quite some time. In the coming matches, he has to target the batsmen and fill his wickets column. With the heavyweights resting, this is chance to prove his worth and keep himself in the roster. The competition is cut-throat and each bowler is vying for a more permanent spot. Picking wickets is the way to go. Perhaps they may take a bit more time to settle in as this was the first game. As the series progresses, we can expect a better performance.

Amit Mishra was the pick of the bowlers without a doubt and he varied his length and flight very well. But, this bowling attack’s real test would come if they have to defend a total. Batting second, the conditions would be a lot easier and the new ball bowlers have to do the damage early before the batsmen get their eye in. Zimbabwe have a few good dangerous batsmen such as Brendan Taylor, Sean Williams and Hamilton Masakadza. Sikandar Raza is the latest addition to the list and he showed that he can be destructive if he settles down.

Coming to the batting, Kohli keeps maturing with each passing ton and grows as a player. One thing the batsmen have to guard against in such games is complacency. There can be a tendency of taking the opposition too lightly, but he was clinical and essayed an almost chanceless innings. No surprises one may say as he gets these hundreds quite regularly. However, from the perspective of his captaincy, it would be a huge boost to his confidence. This innings and the one he recorded at Trinidad (against the West Indies) would do well to establish him as a leader.

At the other end, Ambati Rayudu celebrated his long awaited international call-up with a fifty. Normally, viewers would associate him with the attacking brand of batsmanship as his exploits in the Indian Premier League (IPL) would suggest. However, he was sensible and capitalised on the opportunity to get a good score to his name. Many feared he would be the talent that got away! His Under-19 teammates such as Suresh Raina, Dinesh Karthik, Robin Uthappa and Irfan Pathan to name a few shot ahead of him and made it to the national team. Having captained them at the 2004 Under-19 World Cup, it would have been tough to see his one-time teammates surge ahead. However, fate presents him with the opportunity to bloom. Better late than never!

Shikhar Dhawan was also a part of the same batch and played under Rayudu. The Delhi southpaw is proving his talent at the highest level only now and Rayudu would want to emulate him. The start has been good and consistency is the key. Cheteshwar Pujara, Ajinkya Rahane and a few others are waiting in the wings for their chances. Any slip-up may open the door for the others to get in. This is Rayudu’s chance to come into his own.

India would mark ticks in most boxes after this performance. This tour is more about grooming young talent and building a solid bench-strength. Four ODIs are yet to be playes and it is imperative that they maintain the intensity and keep it going.