On April 14, 1995 India won the Asia Cup. It was their third consecutive Asia Cup triumph and fourth overall. Sarang Bhalerao revisits the day when India pounded Sri Lanka with élan at Sharjah. 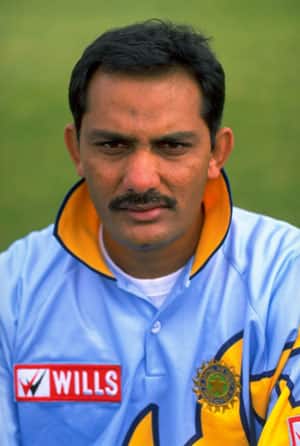 Mohammad Azharuddin’s 90 came off 87 balls interspersed with five boundaries and two sixes as India chased down the total against Sri Lanka in 41.5 overs © Getty Images

On April 14, 1995 India won the Asia Cup. It was their third consecutive Asia Cup triumph and fourth overall. Sarang Bhalerao revisits the day when India pounded Sri Lanka with élan at Sharjah.

Before the last round robin match between Pakistan and Sri Lanka, the net run-rates of the teams were as follows: India (4.8), Pakistan (4.5) and Sri Lanka (4.2). Here were the possible scenarios for the final.

If Pakistan won against Sri Lanka, then they would take on India in the final. However a Sri Lankan win would ensure a three-way tie; the run-rates would then break the impasse since both the teams would then have won two matches each.

Sri Lanka bowled out Pakistan for 178 and needed to score the runs in minimum of 33 overs to reach the final. They did that in just 30.5 overs and stunned Pakistan who had annihilated India and thrashed Bangladesh. Yet, the elusive final berth eluded them.

Just five days prior to the final, India had locked horns with Sri Lanka. Sachin Tendulkar’s hundred had made the contest lop-sided. India chased Sri Lanka’s total of 202 in 33.1 overs.

India won the toss and decided to field first. Out of the six round-robin matches, the team batting second had won four. India got the attacking opener Jayasuriya for 22. It was Jayasuriya who had hammered Pakistan in the previous game. His 15-ball 30 had ensured that Sri Lankan middle order had the time to play themselves in. But his early dismissal put the brakes on Sri Lankan scoring.

In the 24th over, Sri Lanka lost their most experienced batsman, Arjuna Ranatunga courtesy of a run-out. Asanka Gurusinha and Hashan Tillekeratne put on 61 for the fifth wicket. Gurusinghe then added 42 for the sixth wicket with wicket-keeper Romesh Kaluwitharana who perished to leg-spinner Anil Kumble for 18.

Gurusinha ran himself out as he was battling Sharjah heat. He departed after scoring a well-compiled 85. His 120 ball innings included two boundaries and three sixes — hit off Javagal Srinath, Anil Kumble and Ashish Kapoor.

Sri Lanka scored 230 off their 50 overs. The highlight of the innings apart from Gurusinha’s 85, was India’s extras. Thirty-seven extras showed their disorderliness. Venkatesh Prasad (2 for 32) and Anil Kumble (2 for 50) were successful bowlers for India.

India started off their run chase in aggressive manner. Tendulkar took the attack to the bowlers — Chaminda Vaas and Champaka Ramanayake. Manoj Prabhakar and Tendulkar scored 48 in just 8.4 overs. But Prabhakar (9) and Tendulkar (41) fell in quick successions. At 58 for two, Sri Lanka had got a sniff. But Mohammad Azharuddin and Navjyot Singh Sidhu avoided any further aberration. The Indian duo matched each other shot per shot.

India chased down the total in 41.5 overs. It was an easy victory; India didn’t have to worry too much. In the post-match presentation Man-of-the-match Azharuddin summed up the match situation crisply: “Our performance today showed we have a good depth in batting. It also showed that the team is not fully dependent on Tendulkar. We did not bowl all that well, but our batsmen made up for their mistakes.”

Indian team got the winners cheque $30,000 and mellifluous metaphors from their admirers.