The manner in which Pakistan clinched the One-Day International (ODI) series against India surprised many observers of the game, as India is very formidable at home. The credit for Pakistan’s victory goes largely to their bowling attack. But in exclusive chat with PakPassion.net, Mohsin Khan - former Pakistan player and coach - praised the overall balance of the team, singling out Nasir Jamshed as a special talent. 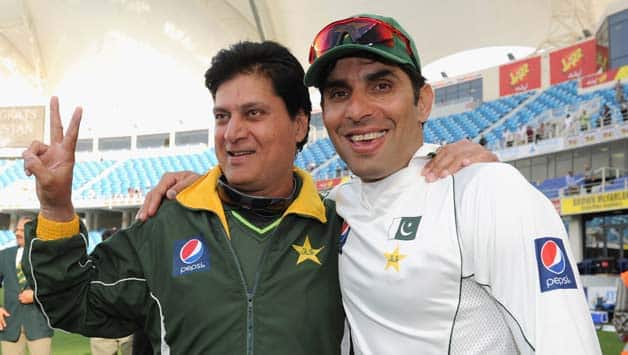 Pakistan coach Mohsin Khan (left) is all smiles with captain Misbah-ul-Haq after winning the 3rd Test match between Pakistan and England at The Dubai International Stadium on February 6, 2012 in Dubai, United Arab Emirates © Getty Images

The manner in which Pakistan clinched the One-Day International (ODI) series against India surprised many observers of the game, as India is very formidable at home. The credit for Pakistan’s victory goes largely to their bowling attack. But in exclusive chat with PakPassion.net, Mohsin Khan – former Pakistan player and coach – praised the overall balance of the team, singling out Nasir Jamshed as a special talent.

Over the past few years, the Pakistani limited-overs teams has utilised non-specialists in key positions. However, Mohsin feels the current ODI team has the right balance to succeed, despite doubts remaining over the T20 International side.

“Some people have said that we have too many similar batsmen in our T20 Internationals. I agree with that. In the first T20 International against India, we had difficulty in winning, but in the second T20I, India scored 192 and we almost achieved the target. In fact, we were cruising to a win at one stage, but one or two players played some irresponsible shots. Coming to the ODI series, Pakistan showed that the team balance is very good, in particular the Pakistani bowling attack of Junaid Khan, Mohammed Irfan, supported by the experienced Umar Gul and Saeed Ajmal. They performed superbly.”

The failure of the Indian bowling attack to consistently contain Pakistani batsmen in the first two games was also highlighted by Mohsin Khan, who pointed out the lack of quality bowlers as an issue for the hosts. “I’m sorry to say, but the Indian bowling looked mediocre. Let’s forget about two match-winners, they didn’t even have one match-winner in the team. Their batting is also not doing well and their bowling looked literally club-level.”

Left-handed opening batsmen Nasir Jamshed distinguished himself in the ODI series with back-to-back centuries which earned him the Man of the Series award. Mohsin was full of praise for the young opener, highlighting the specific technical strengths which make him one to watch for the future.

“It’s good to see Nasir bat as an opener; that is where he’s suited. He plays with the bat very close to the body. And his head is very still, which is technically a very good sign. He never plays a shot without a plan in mind. If he has to lift the ball, then he will do so and it won’t be a fluke as he will lift the ball over cover or mid-on. He has shots all around the wicket. He’s very good off his legs and his square-cuts are good, as are his drives. On top of that, he has a steady head and knows how to craft an innings. That is a big plus point for a youngster. He knows how to pace his innings, and is not the type who will go for a flashy 20 or 25 and then get out. He is an excellent player and I sincerely hope that he performs in the same way in South Africa, Australia or England where the pitches have more bounce and there is more swing.”

Misbah-ul-Haq’s form has been under the scanner for a while, and questions continue to be raised despite him being the leader of the winning side. Mohsin Khan also praised the progress of Hafeez as a player and T20 International captain and asked the Pakistan Cricket Board (PCB) to not repeat their mistakes in the handling of experienced players such as Misbah.

“I was very impressed by Hafeez on this tour. He has shown real responsibility, which is a great sign for any captain when he is appointed. You don’t usually see this, as when good players become captains their performance suffers under the pressure of leadership. In Hafeez’s case we can see he looks more confident as a batsman and as a bowler and that is resulting in consistent performances.

“As for Misbah, he did have two shaky innings in India. All I would ask of the PCB is that if you want him to be a captain of future series, don’t put pressure on him or any other player, like they did on Shahid Afridi regarding his performance, saying that ‘if you don’t perform in one or two matches we will drop you’. These are experienced players and you should not select them in the first place if you are going to threaten them regarding their place in the team.

“What we should say to such players is, ‘give your 100%. If you don’t succeed, then we will give a younger player a chance in your place.’ This is the case with Misbah. Even though he has won the series, there is pressure on him to score runs. If the PCB wants him to captain Pakistan in Tests and ODIs then express faith in him. I would take Misbah to South Africa and continue with him as the ODI captain as batting will be difficult and you need solidity in the middle order.”

Pakistan are scheduled to play three Test matches, two T20s and five ODIs in South Africa starting with a four-day warm-up game from January 25, with the series starting in earnest with the 1st Test at the Wanderers on February 1.

(Amir Husain is Senior Editor at PakPassion.netThe above article is reproduced with permission from www. http://tribune.com.pk/)