Hyderabad steamrolled Bangalore in Match 11 of the Indian T20 League with hundreds from Johnny Bairstow and David Warner, while Bangalore s top-order fell to Mohammad Nabi s wily offspin to crash to a 118 run-loss

Here s the talking points from the match:

For the third time this season, the opening combination of Bairstow and Warner was on a roll, registering yet another century-plus stand which paved the way for Hyderabad s colossal 231 for 2. While in their first two games it was Warner who donned the aggressor’s hat and even at the start against Bangalore, Warner was up and running quickly, but it was Bairstow who got the 50-run mark quicker, off just 28 balls – his first 50 plus score of the Indian T20 League. Many a records were broken during their huge opening stand.

Bairstow and Warner helped Hyderabad notch up their highest opening partnership of 185 the Indian T20 League. This is only the second time in the history of the Indian T20 League that two centuries were scored in an innings after Virat Kohli and AB de Villiers had pummelled Gujarat Lions in 2016. Bairstow innings came to an end at 114 off 56 balls which included 12 fours and seven sixes, before falling to Yuzvendra Chahal. Warner finished at exact 100 not out off 55 balls with help of five fours and fives sixes.

Barman s not so great debut

16-year-old Bengal legspinner, Prayas Ray Barman, made the record of being the youngest player to make his debut in the league when he took the field for Bangalore. And amidst the Warner-Bairstow carnage, Barman held his nerve to give away six runs. He came on to bowl the 7th over with Hyderabad at 59/0 in the powerplay overs. A decent debut over one would have said. But, after that watchful over, Bairstow took on the youngster, with a six and two fours in his second over. 18 came off it, and he was taken out of the attack. By the time Virat Kohli handed the ball back to Barman, Hyderabad had reached 133/0 in 12 overs and Bairstow plonked one for another big one and 12 runs came off it. Off his final over, Warner got a four and Bairstow added two sixes and reached his maiden 100 of the league, taking 20 runs off it.

For the third time in three games Bangalore opener Parthiv Patel found himself walking out with a new partner. This time it was West Indian bigger-hitter Shimron Hetmyer, but that move fell flat as Hetmyer was curtailed by Nabi s guile. The pressure of the scorecard had earlier accounted for Patel who hit a full toss straight to the extra cover fielder. Nabi then had the key wicket of AB De Villiers with a loopy one to which de Villiers didn t get to the pitch and premeditated the ball to spin, which he eventually didn t lost his middle-stump. Nabi finished off an incredible spell with the wicket of Shivam Dube caught at long-on to registered 4-0-11-4.

The Swing pacer from Punjab, Sandeep Sharma, has a knack of picking up key opposition players and with stellar consistency. He had West Indian great Chris Gayle s number in previous seasons and with the wicket of Virat Kohli on Sunday, he dismissed the Indian skipper for the sixth time in just 42 balls. In 2017, Sandeep, then playing for Punjab, had the wickets of Gayle, Kohli and de Villiers in match-winning spell of 3/22. 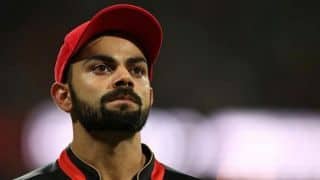