Here are some intriguing statistical highlights from 9th match of Asia Cup T20 2016 between India and UAE.

The ninth match of Asia Cup T20 2016 was played between India and United Arab Emirates (UAE) at Mirpur in Dhaka. Batting first, once again UAE had a poor start as their wickets kept falling regularly and runs too came at a very slow rate. Shaiman Anwar played a lone hand of 48-ball 43 and no other played could even score more than 11 runs. Indian bowlers outplayed UAE since the beginning of the match as Bhuvneshwar Kumar and Harbhajan Singh bowled a tight spell throughout the match. Indian batsmen ended the match quite easily with Rohit Sharma being the highest scorer from the side with 39 runs. Like every match, Abhishek Kumarupdates the record book and brings out 11 interesting statistics from the match.

1.  UAE took 11 balls to score their first run. This is second most balls taken by any team to score the first run in a T20I. 21 balls were taken by Zimbabwe to get off the mark against West Indies in February 2010.

3.  UAE scoring 21 runs during the power-play is joint lowest score by any team against India in T20Is. Zimbabwe scored 21 in their power-play at Harare in 2010 against India.

5.  Indian bowlers bowled four maidens in this match and India became the first Test playing nation to do so in T20Is.

6.  Bhuvneshwar also became the third Indian bowler to bowl two maidens in a T20I after Harbhajan and Jasprit Bumrah.

7.  UAE’s total of 81 for the loss of nine wickets is the second lowest total by any team in T20Is after playing full 20 overs.

8.  Bhuvneshwar’s spell of 4-2-8-2 is the joint second most economical spell by an Indian bowler in T20Is.

9.  With one maiden in this match, Harbhajan has now five maidens in his T20I career, which is joint second-most maidens in this format of the game. Other cricketers with five maidens in T20Is are Trent Johnston and Ajantha Mendis.

10.  India won the match by nine wickets with 59 balls to spare. This is their biggest margin of victory in T20Is in terms of balls left. 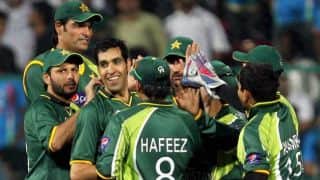