India needs to sort out bowling woes before heading into next year's World Cup.

India lost the second One-Day International (ODI) against New Zealand by 15 runs. A quick glance at the scorecard would indicate that the likes of Shikhar Dhawan and Rohit Sharma — the openers — didn’t come to the party as India chased down a revised 293-run target. It is true that those two are struggling a bit off late and the middle-order played really well to get close to a daunting target. But it was a daunting target! And for that the bowlers are responsible.

This is not India where the conditions do not change much during the duration of a 50-over match. The track generally stays the same and batting under lights becomes easier. The grounds in New Zealand are much smaller and one can clear the boundary with more ease. Big scores are also seen in New Zealand, but once there is a change in the weather, the conditions become different. There was a bit of rain in Hamilton on Wednesday and that played its part in the outcome of the match in some way.

India lost the first ODI in Napier by 24 runs and again chased a big total. The 300-run mark has not been hit so far in the series by either side, but in both matches India had to chase above 290 to win. The important thing to understand here is that these are not 290-plus wickets. In both matches, Corey Anderson took the match away from the Indians when New Zealand were batting. In the first ODI, he scored a quick-fire 68 not out from 40 deliveries with three fours and four sixes.

In the second ODI, he blazed to a 17-ball 44 with two fours and five sixes. His late onslaughts are causing real concern for India, but the bowlers have to take the blame for this. If the Indian bowlers get early wickets, they are not able to exert pressure later on and the batsmen make merry on this. India came back a bit towards the end in the second ODI, but by then the damage was already done. India have gained a good reputation of being great chasers in modern one-day cricket. But one cannot keep chasing scores near or in excess of 300 that often in all conditions.

Ishant Sharma is an experienced bowler, but does not seem to bowl like one. The Indian team management must look towards experienced heads like Zaheer Khan and maybe even Irfan Pathan in future series.

Virat Kohli and MS Dhoni have shouldered the burden of big chases for India in recent times, but they too are bound to fall short every now and then. They have been India’s best batsmen in both the ODIs so far, but they cannot pull-off miracles again and again. That is what India should be wary off when they play for the ICC World Cup 2015. On most days, the Indian batting will get them through. But if they are to face such a situation in a crucial knockout game during the mega event next year, India will come short.

The spinners seem to be better than the pacers at the moment. But India do not have world-class spinners, they have good spinners who need good assistance off the tracks. Australia and New Zealand will not produce spinner-friendly tracks during the World Cup. They will produce pace-friendly tracks. But are the Indian seamers good enough to take advantage of that? The answer is they probably are not good enough. Experience is also a factor. Neither Bhuvneshwar Kumar nor Mohammed Shami are experienced enough in international cricket.

Ishant Sharma is an experienced bowler, but does not seem to bowl like one. The Indian team management must look towards experienced heads like Zaheer Khan and maybe even Irfan Pathan in future series. For now, the bowlers themselves should learn from all this and come out the better or India face a troublesome situation heading into the 2015 World Cup. 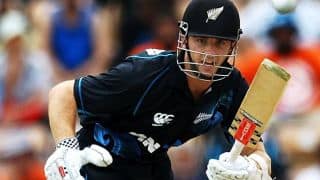