On December 22, 2016, ICC made some interesting announcements. Ravichandran Ashwin was named the Test Cricketer of the Year by the governing body. Why not?

On December 22, 2016, ICC made some interesting announcements. Ravichandran Ashwin was named the Test Cricketer of the Year by the governing body. Why not? He has dominated the Test bowling and all-rounder rankings for a while. He became only the third Indian player to win the prestigious Sir Garfield Sobers Trophy after Sachin Tendulkar (2010) and Rahul Dravid (2004). Team India ended as the No.1 ranked side in 2016 with 120 rating and the success can be attributed to the rise of Ashwin. The off-spinner has been menacing. In the 2015-16 season, Ashwin averaged 25.25 with the bat and claimed 31 wickets at 11.12.

He continued the brilliant form throughout the 2016. Ashwin went on to score 612 runs at 43.71 and claimed 72 wickets at 23.90 in the calendar year. Bowlers win you Tests and Ashwin’s spin-twin Ravindra Jadeja, who was the hero of the Chennai Test earlier this week, has shot up to the No. 2 spot. This is just the second time that the top two spots in the ICC Test Bowlers’ Ranking have been occupied by India players. The first instance was 42-years-back, in 1974, when left-arm spinner Bishan Singh Bedi and leg-spinner Bhagwat Chandrasekhar shared the top two spots.

The other Asian bowlers in the ICC top 10 ranking are Sri Lankan spin wizard Rangana Herath at No. 3 and Pakistani leg-spinner Yasir Shah at No. 10.

The good news is the rise of Indian pacers. Mohammed Shami has been exceptional and if his body permits him, he may be contention for one of the best pacers in the world.

Ishant Sharma made a good comeback at Chennai and Bhuvneshwar Kumar in his limited outings has impressed.

Bowlers win you Tests but it is batsmen, who pull in crowd and more importantly provide the cushion of runs to them. For a while, Ajinkya Rahane was India’s best Test batsman but his poor form in the England series followed by the ouster due to injury did not help his case.

Rahane’s loss turned out to be Karun Nair’s gain. The youngster’s triple century has propelled him to the 55th spot. While Kohli, Cheteshwar Pujara and Rahane remain in the top 15, Murali Vijay’s 26th rank makes him India’s fourth highest ranked batsman in this format.

Ashwin follows next. The No.1 bowler and all-rounder in this format is Team India’s fifth best batsman.

It was a matter of time that Virat Kohli would leapfrog everyone to emerge as the best batsman of the side and now officially. While Rahane’s struggles against English spinners continued, Kohli amassed 655 runs against England at over 109. Not only the Indian captain helped his batting average boost to 50 for the first time in his career but also climbed to the No. 2 spot in the ICC Test Batting Ranking.

Kohli has gone above his contemporaries like Joe Root and Kane Williamson, and is only behind Steven Smith. The only other Indian batsman in the top 10 is Cheteshwar Pujara, who has been extremely consistent since the start of the home season.

With one-off Test coming up against Bangladesh and the 4-Test Border-Gavaskar Trophy against Australia to follow, the Kohli-led India look set to rule the roost for a while. The real test however on how the side performs in challenging conditions like Australia, South Africa, New Zealand and England. 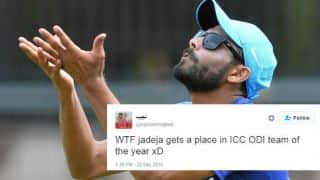 Twitterati lash out at ICC for bizarre team selection