Inspired by recent IPL cricket videos of Nehra bowling, Stallone has instructed the scriptwriter to work in the theme of Rocky coaching the grandson of Tommy Gunn in a face off with the great-grandson of Clubber Lang.

Sylvester Stallone, who had well and truly hung up his boots after Rocky 7 (“Creed”), is apparently dusting off his gloves for one more shot at playing The Italian Stallion. In a move that is bound to bring huge cheer to his legions of fans, Stallone announced that Rocky 8 will indeed be a reality soon.

“After Rocky 4, I thought people had had enough of Rocky and me. But what a surprise when I got a call up for Rocky 5! And then 6 and 7!!! I was aching in every joint – they actually had to keep scripting the story in line with my age and granddad bod,” said the once ferocious on-screen pugilist, soon to become a septuagenarian.

“You know, with Rocky 4, I had absolutely decided to call it a day. But you know how it is – you save the last version of a file with the suffix of ‘- Final’, but before you know it, you have ‘- Final Final’, ‘- Full and Final’ and ‘- Absolutely Final’. That’s how Rockies 5 – 7 happened. But after Rocky 7, even my family and close friends were gasping for breath and urging me to stop. It was only fair that I pulled the plug,” said Stallone.

“Then, I’ve heard this wonderfully inspiring story from India, where a 37 year old fast bowler has been recalled for the 16th time to represent his country. What an honour! Now, it is only a matter of time before Rocky 8 gets into the ring…” Stallone added.

Stallone’s agent tells us that while the star was initially apprehensive about going in front of the camera and trying to display at least one out of the six packs that he so famously sported in Rockies 1 – 4, he seems to have taken inspiration from Ashish Nehra’s work methods – which essentially involved getting injured during nets on the day prior to the first Test, so that he does not actually have to play. And the cunningly calibrated nature of the injury – not severe enough to be sent home, but not trivial enough that it cannot recur during nets on the day prior to the second match – was a thought that Stallone felt was worth borrowing.

Stallone has accordingly asked for a similar injury to be worked into the script early enough so that he can be an integral part of Rocky 8, without having to do much grunt work. Inspired by recent IPL cricket videos of Nehra bowling in tandem with young Ishwar Pandey, Stallone has reportedly instructed the scriptwriter to work in the theme of Rocky coaching the grandson of Tommy Gunn in a face off with the great-grandson of Clubber Lang.

(Venkat Shankar is a private equity investor | ex-soda salesman | Convinced that there is a lighter side to everything | Atheist who believes that if indeed there is a god, his name would be Ilayaraja. The above article was originally published in UnReal Times) 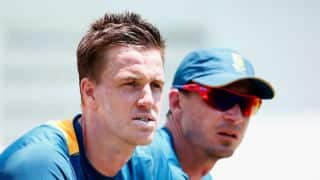