Intikhab Alam, born on December 28, 1941, is one of the most respected figures in Pakistan cricket.

Intikhab Alam, born on December 28, 1941, is one of the most respected figures in Pakistan cricket. He was an important part of the Pakistan unit from the late 1950s to the 1970s. Post retirement, he made a successful transition into coaching and has won two World Cups with Pakistan. Nishad Pai Vaidya picks 10 things you should know about the former Pakistan all-rounder. 1. Born in British India Intikhab was born on December 28, 1941 in the town of Hoshiarpur in modern-day Punjab, India. His family later migrated to Pakistan. 2. First-Class debut at 15 On October 11, 1957, Intikhab made his First-Class debut at the age of 15 playing for Karachi C against Sind A in the Quaid-e-Azam Trophy. He bowled 21 overs in the first innings and took two wickets. 3. Wicket off first ball in Test cricket Intikhab is in the elite club of 19 bowlers to have taken a wicket off their first ball in Test cricket. He achieved it against Australia in 1959 at the age of 17. In that club, only Nathan Lyon, Maurice Tate and Intikhab have gone on to take 100 wickets. 4. Surrey legend The team Intikhab played the most for was English county Surrey. He played for them from 1969 to 1981 and was awarded a benefit year in 1978. He played as many as 232 First-Class matches for them and scored 5707 runs with four centuries. He also took 629 wickets with 25 fifers. 5. Leading wicket-taker for Pakistan in First-Class cricket Intikhab took a total of 1571 First-Class wickets, more than any other Pakistan player. Interestingly, India s Bishan Singh Bedi is right behind him on the leader board with 1560 scalps. 6. Spinning New Zealand to defeat In February 1973, captain Intikhab led Pakistan from the front by taking seven for 52 against New Zealand in Dunedin to bowl them out for 156. Pakistan imposed the follow on and Intikhab took five for 49 bowl Pakistan to a huge victory. 7. Only Test ton In March 1973, Intikhab scored his first Test ton. It came against England in Faisalabad as he hit 138 to help Pakistan score 569 in reply to the tourists 487. 8. Double World Cup winning coach In 1992, Intikhab was the coach of the Imran Khan-led side the lifted the World Cup Down Under. In 2009, he was at the helm again when Younis Khan captained Pakistan to victory in the ICC World T20 2009. Thus, he is the only coach to win the ICC World T20 and the World Cup. 9. First foreign coach of a Ranji team In 2004, Punjab appointed Intikhab as the coach of their Ranji Trophy side. He thus became the first foreigner to coach a Ranji Trophy team. 10. Brother also a player Intikhab s brother Aftab also played First-Class cricket. He was five years older to Intikhab and represented Karachi and other sides in 46 First-Class matches. Aftab died in Saudi Arabia in 1983. (Nishad Pai Vaidya is a Correspondent with CricketCountry and anchor for the site s YouTube Channel. His Twitter handle is @nishad_45) 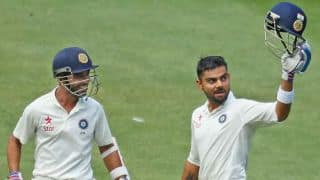