IPL 2013: Ricky Ponting takes a stunner with a Superman-like leap during MI vs DD clash

IPL 2013: Ricky Ponting takes a stunner with a Superman-like leap during MI vs DD clash

On April 9, 2013, Ricky Ponting took an absolute stunner to dismiss Unmukt Chand for the Mumbai Indians in the Indian Premier League (IPL). Harbhajan Singh was the bowler as Ponting took the catch off the first ball of the Delhi Daredevils innings. Mumbai went onto win the match after that. Shrikant Shankar looks back at the match in which the IPK witnessed one of its greatest catches in its short history.

Mumbai Indians (MI) had lost one and won one from their first two matches in the Indian Premier League (IPL) 2013. Both those matches were away from home. Their third match was against Delhi Daredevils at the Wankhede Stadium on April 9. Delhi came into the match on the back of two losses. In a way, both teams needed a win. Mumbai were led by Ricky Ponting and Delhi by Mahela Jayawardene. Ponting won the toss and elected to bat.

Ponting and Sachin Tendulkar opened the batting for Mumbai. That was a sight not many would have ever expected to see, especially the Mumbai faithful. They were after all the two greatest batsmen of the 1990s and 2000s playing against each other for India and Australia. Anyway, it was not a fairy tale combination of their individual brilliance. Irfan Pathan opened the bowling and dismissed Ponting on the sixth ball of the match for a duck. Ponting gave a catch to Jayawardene at mid-off. Tendulkar was run-out on the third delivery of the second over by Jayawardene for one run. Wankhede was silent.

Then came a brilliant 132-run partnership between Dinesh Karthik and Rohit Sharma for the third wicket. The duo added the runs in 13.1 overs at a run-rate of 10.02. At that time, Karthik was on a different planet. He outscored Rohit as he smacked 14 fours and two sixes in his innings. When Karthik was dismissed for 86, Rohit was batting on 38. Karthik sliced one from Morne Morkel to Jeevan Mendis at extra-cover in the 15th over. Karthik faced only 48 deliveries and his strike-rate was 179.16.

The base was set and Mumbai were powered by Rohit in the last five overs. They posted a challenging total of 209 for five in their 20 overs. Rohit remained unbeaten on 74 off 50 deliveries with four fours and five sixes. There were important contributions from Kieron Pollard (seven-ball 13) and Ambati Rayudu (eight-ball 24) down the order as well. Delhi had to chase a 210-run target against the likes of Harbhajan Singh, Mitchell Johnson, Pragyan Ojha and Lasith Malinga in front of the intimidating Wankhede Stadium crowd.

Unmukt Chand and David Warner walked out to bat for Delhi. Harbhajan opened the bowling for Mumbai. The first ball was tossed up outside off-stump. It might even have been a doosra as the ball didn’t turn into the right-handed Chand. He put his front-foot forward and tried to work the ball on the leg side. In turn, Chand closed the face of the bat and the ball took the leading edge. The ball flew towards the extra-cover region. Out of nowhere, Ponting plucked the ball out of the thin air flying to his right.

Ponting had actually slipped as he tried to move towards the flight of the ball. He regained his footing enough to leap parallelly in the same direction of the ball and take a stunning catch with his right hand outstretched. There were wild celebrations in the Mumbai camp. Harbhajan and Ponting embraced each other. Who would have thought that was possible?

Delhi, though, did not fold and fought valiantly to come close to the target. Warner top-scored for them with 61 off 37 deliveries with five fours and four sixes. Manpreet Juneja scored 49 off 40 deliveries with six fours. Morne Morkel added some lower-order fireworks as he struck a nine-ball 23. But it was Mumbai’s day and Ponting’s day as they won by 44 runs. Delhi had only scored 165 runs for nine wickets in their 20 overs. Karthik was the Man of the Match. 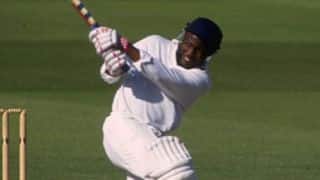