Indian Premier League auction will be held on February 12, 2014.

The Indian Premier League (IPL) auctions are here and the franchisees are once again in a mad rush to find the best picks and top performers for their team. While there are the international stars who are worth in gold shining across leagues and for national teams, there could still be some diamonds yet to be polished from the official list of 233 players listed in the auction so far. This article looks at some of those players who can give value for their money.

1) James Neesham: New Zealand cricket is warming to Corey Anderson fever. The left-hand all-rounder will undoubtedly be among the most expensive pick in the IPL auction, but teams who have done their research well would not have missed their sight on another all-rounder, James Nesham. With his bowling skills and equally impressive big-hitting skills, Neesham could well be the impact player. To be specific, Neesham is the player that budget teams like Kings XI Punjab (KXIP), Rajasthan Royals (RR), Sunrisers Hyderabad (SH) should be aiming for. He performed well for New Zealand during their dismal tour to Bangladesh.

2) Farveez Mahroof: He may have faded away from limelight, as he is no more part of Sri Lanka’s national plans. But 29-year-old Mahroof can still be a prized catch for a team wanting an all-rounder. In all likelihood the franchisees would not put a high bid on him going by his present reputation, but it might just be a smart move to keep him in the team. With his T20 experience, he could be a good death overs bowler

3) Mohammad Mahmudullah: Bangladesh is not all about Shakib Al Hasan! Mahmudullah is the one who can be in the radar of IPL teams. With his off-spin and aggressive batting style, he is the typical T20 all-rounder.He hasn’t  yet played the IPL.

4) Wriddhiman Saha: Chennai Super Kings (CSK) may have a champion team, but that also means their equally strong bench strength has gone untested. Wriddhiman Saha is among the ones who has spent most of the time cooling the heels whilehe was  at CSK (Has been a bench strength for India as well). Saha isn’t a power-hitter,  but can be valuable like say Ajinkya Rahane or Mahela Jayawardene.

5) Tim Southee: Another Chennai player used hardly by the franchisee. Southee is not just an exceptional swing bowler but someone whom you can rely on to deliver six yorkers in an over. And he has done it once for Chennai. Southee is among the few clever T20 bowlers who can outfox the batsmen. And not to forget, considering it is just about 20 overs, Southee can still sustain his big hitting in the last five overs. Another value-for money overseas player.

6) Johnson Charles: Absolutely no doubt that he is going to be a top pick for the IPL teams. His aggressive style as an opener makes him a near perfect candidate for starting the innings for any team. And his brief success on the recent tour to India too will hold him in good stead.

7) Dilruwan Perera: The riskiest of buys, as not much has been known about him in the international scene. But an impressive Test debut  would have attracted some eyeballs, even if it was in Tests.

8) Mitchell McClenaghan: A risky buy, he isn’t the best with the bat. But McClenaghan is a Mitchell Johnson-like pacer, who could go for runs, but can get wickets. And irrespective of the format, wickets can win you a game every single time. McClenaghan takes wickets  when a batsman is going after him. In the series against India, he bagged some important scalps of MS Dhoni and Virat Kohli when they were in full flow. A genuine fast bowler for IPL teams to pick from. The only issue could be, pacers from Australia and New Zealand haven’t fared well on Indian pitches and it takes some skill to adjust to conditions here.

9) Rayad Emrit: Trinidad & Tobago is known to contribute valuable players to IPL with Kieron Pollard, Kevon Cooper, Sunil Narine. Emrit made his international debut long back yet, to hog the limelight. He can be a decent buy.

10) Doug Bollinger: The Australian pacer has been away from the limelight. A regular for Chennai, he missed out on a few matches in the last season. A smart bowler with a good bouncer for Indian pitches. Made early inroads for Chennai with the ball.. 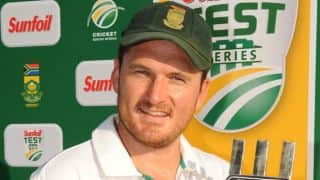