The IPL Governing Council have released the rules and regulations for the 2014 Auctions.

The Indian Premier League (IPL) Governing Council released the rules and regulations for the 2014 Auctions. Interestingly, they have introduced a “rights to match” feature — which will let the franchises bid for a player, after they have retained five players from their respective 2013 squads. In a two-part series, Sudatta Mukherjee looks at the different franchises and the extra players they might want to retain.

The Indian Premier League (IPL) is full of twists and turns. There has been never been a season devoid of entertainment, both on and off the field. To spice things up even more, this year, the Governing Council (GC) has decided to introduce a new feature in the IPL 2014 Auctions — Rights to Match. What is this new facet all about?

The ‘rights to match’ feature lets a franchise bid for a player that was a part of their 2013 roster, apart from those they have already retained.  For example, if Chennai Super Kings (CSK) have retained five players,  and another franchise bids for and wins one of their former players who wasn’t retained at the auction,  then Chennai can bid for that cricketer  after the bidding process is done. But there is a twist. If the franchise has retained five players, they can bid for only one player using the rights to match option. Whereas, a franchise which has not retained any player, has three opportunities to use their rights to match.

Following is the break-up of “rights to match”:

There are many franchises who would be delighted with this option at the auctions. For a franchise like Chennai or Kolkata Knight Riders (KKR), who have a plethora of high-quality players in their 2013 roster, they can exercise this option to retain their core strength However, even if they retain five players, they get only one shot at bidding the special player.

Here is a list of players that the different franchises would like to bid for using ‘Rights to Match’ feature.

Chennai have been the team to beat under Mahendra Singh Dhoni and had their core intact for the first six years. Chennai are likely to retain the following players:

1. MS Dhoni: He is the face of Chennai and the biggest factor in their success. A proven match-winner with his calm and inspiring leadership an destructive batting.

2. Ravindra Jadeja: The year 2013 has been wonderful for the Saurashtra all-rounder.  Former Rajasthan Royals captain Shane Warne called him ‘Rockstar’ for his all-round abilities. Chennai bought him for a whooping US$ 2 million and should retain him in all likelihood to maintain the balance of their side.

3. Ravichandran Ashwin:  One of India’s leading spinners, Ashwin has been a force to reckon with for Chennai . If Chennai won in 2010 and 2011, , it was largely due to Ashwin’s remarkable consistency as a wicket-taker. Unless Chennai have other plans, Ashwin would be retained as their primary spin arsenal.

4. Dwayne Bravo:  The West Indies One-Day International (ODI) captain was the Purple Cap holder in last year’s edition. He took 32 wickets from 18 matches at an amazing average of 15.53. With the bat in hand, he gives it a serious whack and is a game-changer in every department.  He is one of the most sought after T20 specialists in the world.

5. Suresh Raina: He has played 99 matches for Chennai and has scored 2,802 runs. Another player who gets multiple values: a match-winner with the bat, sensational fielder and more than useful bowler.

However, there are other quality players in their 2013 roster and they may find it difficult to let go. Here are some players Chennai may bid for and possibly use their rights to march for.

1. Albie Morkel:  One of the star all-rounders in the IPL — a destructive bat and productive bowler, just perfect for T20 cricket.

2. Michael Hussey:  The Australian southpaw is “Mr Dependable” at the top and was the winner of the Orange Cap during the IPL 2013 where he scored 733 runs from 17 matches.  If he is available for the IPL, expect Chennai to bid for him with vigour for they wouldn’t want to miss his stability, dynamism and experience at the top.

3. Mohit Sharma: Playing his maiden IPL last year, Mohit Sharma picked up 20 wickets from 15 matches at an impressive average of 16.30. He can keep it tight and has been a part of the Indian setup for a while.

Mumbai Indians (MI) had a stellar 2013 as they won the Indian Premier League (IPL) and the Champions League T20 (CLT20). Such is the strength in their squad that it is difficult to pick five they would retain. Nevertheless, here are a few names that may be the preferred options:

1. Rohit Sharma: Riding high on his recent impressive form and also guiding the team to two title wins this year,  retaining him is a no-brainer.  The Indian ODI opener scored 409 runs from 19 matches in 2013 season.

2. Dinesh Karthik: After Dhoni, Dinesh Karthik has been most favoured wicketkeeper-batsman in India. In his 92 IPL matches, he has scored 1,741 runs. Being a senior player and having Mahendra Singh Dhoni in the side the experience of playing international cricket, MI is likely to retain Karthik over local Aditya Tare or Ambati Rayudu.

3. Mitchell Johnson: Sachin Tendulkar had said that the Australian pacer will be the player to watch out for before the start of the ongoing Ashes series. Johnson has lived up to Tendulkar’s prophecy. And how! Johnson is also a handy with the bat lower down the order.

4.       Lasith Malinga: The slinger is a must one would say. He may not be as dangerous as he was earlier, but on his day, he can run through any side with his disconcerting action and toe-crushing yorkers.

5. Kieron Pollard: The West Indies big hitter has been in the team for his all-round ability. On his day, he can change the face of the game in an instant. In 2013 edition, he scored 420 runs in 18 matches at an average of 42.00. He has taken 51 wickets from 62 IPL matches. An impact player.

There following are some of the players that Mumbai will find it hard to let go:

1. Ambati Rayudu:  The 28-year old is seen one of the best young batsmen in the country who has done very well in the IPL.  Nobody can forget the six that he hit off the last ball against KKR in the last league match of 2011. When Royal Challengers Bangalore had shown interest in him, Mumbai refused to sell him. It is highly possible that Mumbai might bid for Rayudu.

2. Dwayne Smith: A pure T20 specialist, Dwayne Smith has led MI to victory with his batting. He is also a handy bowler. His recent string of scores for Mumbai are as follows: 44, 59, 48 and an unbeaten 63. There is a possibility that Smith may be retained instead of Pollard.

3. Harbhajan Singh: He has been India’s leading spinner until Ashwin took over. He had captained Mumbai to victory at the CLT20 2011 and has taken 78 wickets from 82 IPL matches. Harbhajan is not the bowler he once was, but you can never write off a player like him. Given his huge experience, Mumbai may be tempted to retain him.

4. Pragyan Ojha: The left-arm spinner is a key weapon in the Mumbai squad. He has taken 85 wickets from 79 IPL matches. The most favoured spinner alongside Ashwin in the Indian team, Mumbai bought Ojha from Deccan Chargers ahead of the 2012 season.

Delhi Daredevils (DD) have had mixed fortunes in the IPL and some would say that they have faltered at critical junctures. They have come close to qualification for the final a few times have collapsed under pressure. Even though they have some great players in the side, they have been unable to utilize their talents. Let us see the players that Delhi are likely to retain.

1. David Warner: There is no way Delhi Daredevils will let go of the Australian opener. Warner is in great form in the ongoing Ashes series and has done pretty well for Delhi. He packs a punch at the top and is a good batsman to have upfront.

2. Virender Sehwag: He forms the other half of a feared opening combination with Warner. On his day, can destroy the best of the bowlers in the world, though his fortunes have been on the downswing.  In 2012, he was only five runs short of scoring 500 runs in an IPL season. One of the most experienced players in the Delhi franchise, it will not be an easy decision for DD to make with regard to retaining him.

3. Kevin Pietersen: The England star injects energy in the Delhi batting order. With a superb technique and good grasp for the game, Pietersen has scored 634 runs from 21 IPL matches at an average of 42.26. A huge weapon for Delhi, he is a must-retain for DD.

4. Morne Morkel: One of the leading pacers and an important member of the South African team, he can trouble the batsman with deliveries fired on the block hole and discomforting pace. Delhi will retain him for his ability to bowl line and length in the death overs.

5. Umesh Yadav:  An Indian who bowls genuinely fast. Considering the team needs adequate representation from India, Yadav is likely to be retained.

Following are the players Delhi are likely to bid for in the “rights to match”:

1. Irfan Pathan:  Would be up against Umesh Yadav in the race. He might just have a bit of the advantage with his batting.   If Yadav provides pace, Irfan brings in experience and balance in the lower middle-order.

2. Mahela Jayawardene: One of the premier Sri Lankan batsmen, Jayawardene has been a consistent run-scorer. Delhi will surely bid for the Sri Lankan for he adds stability at the top.

3. Andre Russell: An all-rounder whose game is meant for T20 cricket. He can hit the ball a fair distance and also bowls at a decent pace. 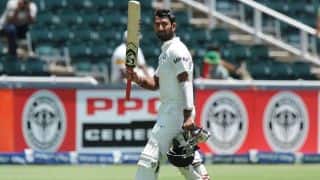