In contrast to the criticism they have faced in the past, Indian bowlers have exceeded expectations.

While there was a lot of hullabaloo about Indian bowlers unable to crack the whip in the last six months, the Indian Premier League (IPL) 2014 figures state otherwise. Out of the top 10 Indian bowlers in the tournament, six of them have played for India at some point of time. On the other hand, the figures of uncapped Indian bowlers are not so disheartening either. Sudatta Mukherjee looks at whether India are fine with the current bowling line-up or need a change.

After playing six Tests and 35 ODIs, Bhuvneshwar Kumar‘s bowling average stood as 37.88 and 37.32 respectively. His T20Is in international cricket average of 17.54 has been far better than that; additionally, he has had an economy rate of 6.22. Mohit Sharma‘s averages, on the other hand, have looked pretty distressing. Varun Aaron, who had made his debut three years ago (of course, he has not played a lot of matches), does not have a good average either.

On the other hand, there were these new set of bowlers, some who have had already made a mark in domestic cricket and some who became famous through IPL. One of them is Sandeep Sharma. The Under-19 World Cup-winning bowler’s First-Class bowling average is 22.78. His average in the shortest format of the game is 18.07. Then there is Pravin Tambe, for whom age is just a number. After getting noticed in last season of IPL, he got a chance to play First-Class cricket for Mumbai. After 22 T20 games, his average stood at 17.90 and he had a good economy rate of 6.39.

Sandeep Sharma, Tambe and Chahal have already made an impact on the field by their performances. While Sandeep has made a big name for scalping some key wickets like Chris Gayle, Virat Kohli, Gautam Gambhir, etc.; the good thing about Sandeep is that he is able to provide the early breakthrough which is much needed in a game of T20. On the other hand, Chahal has been the bowler who has given away few runs and has put pressure on the opposition. Tambe’s has been the fairytale saga of IPL. A year after he was discovered, he still continues to unsettle batsmen, with his leg-breaks. All-in-all, there is a good bench of uncapped players waiting to get a call from national selectors.

In international matches, Indian bowling line-up has been strengthened by Bhuvneshwar, Mohammed Shami, Ishant Sharma, Ravichandran Ashwin and occasionally by Amit Mishra, in recent times. Ravindra Jadeja also comes handy as a bowler. Mohit Sharma and Aaron has been tested in recent times, as has been Umesh Yadav. Most of them in their early stages of career have a long way to go and it will be unfair to write them off at this point.

The good factor for selectors is the fact that the capped players are doing quite well in IPL. For example, Bhuvneshwar  has managed to pick up only four wickets from last six T20 matches. He has an average of 25.75 in ICC World T20 2014. Fast forward: He is the orange cap holder at the time of writing of this article, with 18 wickets from 10 matches and has an average of 12.88.

However, for once if the national selectors have to look beyond the capped players, they have got Sandeep, who has picked up 14 wickets from the eight IPL matches he has played till now and has a good average of 17.85. Most importantly in very short time, he has become the captain’s go-to man.

While the uncapped players are the talk of the IPL, the capped Indian bowlers have done enough to prove that they shouldn’t be left unnoticed. 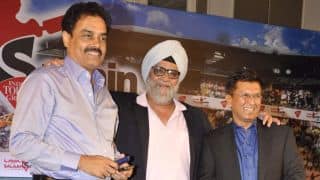