With over 2,000 runs in the Indian Premier League (IPL), Yuvraj Singh is all set to play in his first ever final. IPL came into inception a few months after India won the inaugural ICC World T20 in South Africa, where Yuvraj was the star for India. The six sixes he hit off Stuart Broad at Durban is still etched in the memory of every Indian fan. Yuvraj is perhaps one of India’s greatest limited-over cricketer. He has already won the T20 World Cup and the ICC World Cup. IPL was seen as something that was tailor-made for him. READ: Yuvraj Singh – The fighting warrior

He was the icon player for Kings XI Punjab (KXIP) in the first edition of the IPL, but missed out on a chance to play in the final as his team was eliminated in the knockout stage, despite finishing the tournament in the second place. That is, however, as close as he got to being in an IPL final; but nine years later, here he is with a golden opportunity to win his maiden IPL. READ: Yuvraj Singh-Ashish Nehra brilliance: A ’90s kid’s nostalgia

He has a well balanced team in Sunrisers Hyderabad (SRH) to back him. David Warner has led SRH beautifully right from the beginning. Yuvraj did not play in the initial stages of the tournament, but has been handy in the middle-order, after a couple of off games initially. He has been striking at close to 127 this season and has been the one to give his team the momentum after they lose a wicket or two. READ: IPL 2016: Krunal Pandya calls Yuvraj Singh his idol

Yuvraj has always hogged limelight during most auctions. He was bought for a record Rs. 14 crores by Royal Challengers Bangalore (RCB) in the 2014 auction.  It was then bettered by Delhi Daredevils (DD) in the very next season, shelling out a whooping Rs. 16 crores on the left-hander. Ironically, he had one of his worst seasons with DD, scoring just 248 in 14 matches at a little over 19.

SRH spent just Rs. 7 crores on him and it is already turning out to be a bargain. He seems to know his role in the team and is quite happy to play it. Everyone knows Yuvraj is a complete team man and can also roll his arm over, if needed.

SRH have suffered a few blows with injuries to Ashish Nehra and Mustafizur Rahman‘s , perhaps coming at the wrong time, but it has given an opportunity for someone like Trent Boult and Barinder Sran to step up and deliver.

Yuvraj may have played for numerous franchises (five to be precise), but he has never gotten this close to winning it. Yuvraj finally has a golden chance to win something that has eluded him for 9 years now. 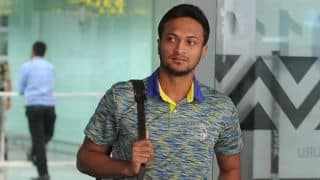