In spite of an injury to the experienced Ashish Nehra, SRH didn't lose the belief they had on their pace attack in IPL 2016

In Tests, they often say bowlers win you matches. If a team can take 20 wickets they have an exponential chance of winning a Test. In T20’s too, the saying holds almost true. If your bowlers can hit the right length and make it difficult for the batsman to score, soon, they’ll be rewarded with wickets. At a time when, it is easy to praise a batsman who can play cheeky shots at will and hit the ball a huge distance, it is almost obvious that a bowler’s struggle might go unnoticed. But, in a campaign which relied heavily on pace and accuracy, Sunrisers Hyderabad (SRH) had even gone past their own expectations. FULL CRICKET SCORECARD: Royal Challengers Bangalore  vs  Sunrisers Hyderabad , Final match, IPL 2016

Even despite choosing a spinning legend, Muttiah Muralitharan as their bowling coach, SRH’s bowling had their eggs in just one basket – Pace. Bhuvneshwar Kumar and Mustafizur Rahman were the two main trendsetters of IPL 2016. With 40 wickets in between them, ‘Bhuvi’ and ‘Fizz’ overshadowed the efforts of other bowlers in the season. The faith SRH’s coaching staff had in them, was simply evident when Warner decided to go by his team’s strength and decided to defend the target set up by him and his fellow teammates. Mind here, after looking at the RCB batting line-up and knowing about their ability to finish off games, SRH could have decided to bowl first but they didn’t. They backed their strengths and fought bravely. ALSO READ: David Warner praises Bhuvneshwar Kumar as ‘world-class bowler’ after IPL 9 victory

Ashish Nehra injured his knee midway into the IPL and Barinder Sran supported the duo pretty well with 14 scalps in as many matches, could not be thanked much less for their support and contribution. But, it was almost predictable that Warner would go in with Mustafizur and Bhuvneshwar in the last 4 overs and that he did. Yorkers, length variations and change of pace, both the pacers had by now become adept to the task that they had been performing for the team in the last few matches. They again did that to perfection.

In what turned out to be a tremendous comeback, SRH fought back with wickets. But not only with wickets, but also putting pressure on the new batsmen at the very same time. The same pressure that they had managed to create on almost batsmen in the death overs.

Both the fast bowlers finished the season on a high. While Bhuvneshwar won the Purple Cap for his 23 wickets in the edition, Mustafizur ended up having a magnificent first outing in the IPL. The Bangladeshi born left-armer might soon take giant steps in world cricket. With death bowling of some class, their combo proved to ‘the’ factor for teams playing against them. And while they dazzled, they might have just ignited the debate of whether to go for a world-class bowler or a world-class batsman when approaching an IPL auction. 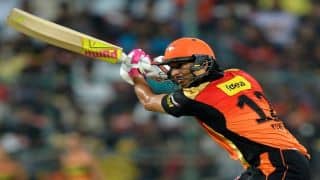