IPL 2017: Akshar Patel proving to be Kings XI Punjab’s man for all seasons

IPL 2017: Akshar Patel proving to be Kings XI Punjab’s man for all seasons

When he does not shine with either of bat or ball, Akshar comes up with spectacular display of athleticism on the field. Take, for example, KXIP s recent match against the KKR on Tuesday, where he caught Uthappa & run out Lynn.

After spending an entire season of Indian Premier League (IPL) with the Mumbai Indians (MI) on bench in the year 2013, Akshar Patel finally got his chances with Kings XI Punjab (KXIP) in IPL 2014. Picked ahead of the old warhorse Murali Kartik in the playing XI, Akshar lived up to the management s faith, going on to become the Emerging Player of the Tournament . Since then, he has not just established himself as an integral part of KXIP, but also emerged as the franchise s man for all seasons. IPL also laid a foundation for him to play in the national side. Even in IPL 2017, Akshar remains to be his captain s man Friday.

He invariably answers his captain s SOS calls with the ball, with the bat and even with his fielding skills. Against the Delhi Daredevils (DD) earlier this season, it was his 29-ball 44 that guided KXIP from a shaky 65 for 5 to 144. Though his effort came in a losing cause, it did lend the total some respectability. Against the Gujarat Lions (GL), his 17-ball 34, which had 3 fours and 2 sixes, helped his side get to a beyond-par total and win the contest by 26 runs. Returning with figures of 4-0-36-2, he was vital with the ball too.

However, the most important contribution from Akshar came in the game against Royal Challengers Bangalore (RCB). Batting first, KXIP were reeling at 78 for 5. In came Akshar, and scored a rapid 17-ball 38 not out. His side ended on 138 for 7, a total 19 runs too many for RCB. Importantly, his effort came on a sluggish track where some of the biggest names in world cricket struggled for runs. Akshar was equally good with the ball, taking 3 for 11.

When he does not shine with either of bat or ball, Akshar comes up with spectacular display of athleticism on the field. Take, for example, KXIP s recent match against the Kolkata Knight Riders (KKR) on Tuesday. After scoring 10-ball 8 not out and going wicket-less in the match, Akshar found other ways of taking wickets. In the 10th over of KKR s chase, Akshar produced a blinder to get rid of danger-man Robin Uthappa. KKR s best batsman this season, Uthappa fell for a duck trying to slog the bowler over deep midwicket. However, Akshar, who came running in from the boundary and made a full-stretched dive, pouched the ball and did not let it slip from his hands after landing. More than the bowler Rahul Tewatia, it was Akshar s wicket.

He was not done yet. In the 18th over, when Chris Lynn was still going great guns and looked set to snatch the victory from KXIP s claws, Akshar ran him out with a superb throw from the outfield. A tired-looking Lynn took on the wrong man, as Akshar s accurate throw landed in the keeper s gloves on one bounce from deep midwicket.

Talking about this season, Akshar has made a silent-yet-telling contribution in all the departments. He is in the top-five in the list of most runs and wickets for KXIP (5th and 3rd respectively). In fielding, he is second to none. With 6 wins from 12 games, KXIP are still in with a chance to make it to the playoffs mathematically. Needless to say, Akshar will have a crucial role to play in his side s bid to make it to the playoffs, and beyond that once through. 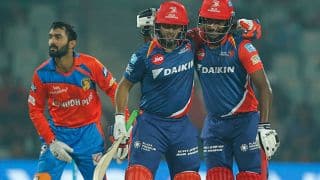