Ben Stokes, Imran Tahir and Rashid Khan will be keenly eyed by all franchises in the upcoming IPL 2017 auctions.

The fixtures have been announced for the much-awaited Indian Premier League (IPL) 10. Everything seems to be in place as the spectators are less than two months away from the cricketing carnival in India’s packed domestic schedule. However, the IPL auction is slated to take place on February 20 which will give a glimpse of who will be the side to pack a punch in the upcoming season. The defending champions, Sunrisers Hyderabad (SRH), have got rid of Eoin Morgan, Trent Boult and a few other domestic performers. They will be eager to fill in the void in the spin arsenal by adding the likes of Imran Tahir, Afghanistan’s Rashid Khan, Pravin Tambe and strengthen their all-rounders’ spot by placing a bet on England’s Ben Stokes.

After some nerve wreaking contests till the playoffs, SRH met Royal Challengers Bangalore (RCB) in the summit clash and got the better of them by 8 runs. It was a collective effort from David Warner s troops and they deservingly had the last laugh in the mega event. Their batting took over from precarious situations, bowling department held their nerves to bail them out of jail and fielding improved with every passing game. Amidst all this, SRH have come out with their list of released and retained players for the forthcoming edition. IPL 10 is few months away and SRH have tried to strike out a balance in their squad by churning out a few big names whereas retaining the core of the side.

With England’s shorter format skipper, Eoin Morgan, and New Zealand’s pace spearhead Trent Boult not getting a longer rope in the previous edition, due to presence of many star players, SRH s think-tank have drawn curtains on them. They are the only overseas players released whereas Aditya Tare, Karn Sharma, Ashish Reddy and Tirumalasetti Suman are some of the domestic names to miss out.

Did the players deserve the axing?

When a team is filled with the likes of Shikhar Dhawan, Moises Henriques, Yuvraj Singh, Warner, Bhuvneshwar Kumar, Ashish Nehra, Mustafizur Rahman and Ben Cutting, it becomes difficult for the management to accommodate a place for all. A well balanced side like SRH had their hands full during their memorable run in 2016 and hence could not feature Kane Williamson, Boult or Morgan in the playing XI for long.

It is a smart move from the franchise to release players of high calibre as the side promises of a steady eleven even without them. As a result, the two international stars combined to play only 8 games in the season gone by. Morgan featured in 7 matches whereas Boult got a solitary appearance in the whole edition.

Talking about the domestic names, Karn Sharma, Aditya Tare, Ashish Reddy and Tirumalasetti Suman have been omitted from the side owing to limited opportunities, rise of Barinder Sran and Deepak Hooda coupled with their own insignificant outings. SRH have been smart in not piling up their stack and instead have got rid of them with another important season coming up.

They have maintained their core side with four set overseas players in form of Warner, key pacer Mustafizur and two all-rounders in form of Henriques and Cutting. Henriques and Cutting were integral part of the squad and helped in lifting the title with some impeccable performances. They churned out essential contributions with bat or ball and hence the team tank did not tinker with the well balanced line-up. Let us have a quick look into the table below, illustrating the retained players.

Do they still pack a punch?

There is no surprise going through the list of retained players. The likes of Dhawan, Warner, Henriques, Bhuvneshwar, Nehra, Naman Ojha, Ricky Bhui, Kane Williamson, Siddharh Kaul, Bipul Sharma, Sran, Yuvraj, Cutting, Mustafizur and Hooda pack a punch and have been backed rightly.

SRH have openers like Dhawan and Warner who can make any team pay if they are on a roll. They have kept faith in Williamson and probably see him as their backup opener. In Henriques, Yuvraj, Hooda and Cutting, they have quality all-rounders who can accelerate or play to the situation by adding runs in the death overs. Naman and Ricky are other vital performers who can be handy if used judiciously.

Kaul and Bipul have been backed up after showing glimpse of their talent in the previous editions. Undoubtedly, SRH emerged champions in the last edition courtesy their bowling prowess. A pace attack comprising of Bhuvneshwar, Sran, Nehra and Mustafizur can cause hiccups in any opposition camp. They have been backed up by all-rounders like Yuvraj, Cutting, Bipul and Henriques. Overall, they have enough fire in all departments to retain the trophy in 2017.

Nonetheless, to remain consistent in an unpredictable format will test SRH’s character fully. They should be wary of this fact and prepare accordingly. For now, Warner and head coach, Tom Moody, seem to have shrugged off some responsibilities but still have new challenges ahead. 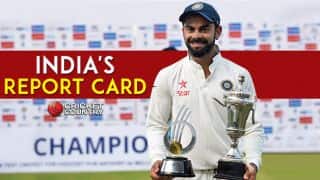 India vs England, Test series: Hosts' marks out of 10