Manoj Tiwary walked out as a finisher and donned the hat quite well on Saturday well enough to prove to the difference between the sides.

A month before Virat Kohli made headlines as India Under-19 s World Cup winning captain; Manoj Tiwary had made his international debut in Australia. The cricketing cognoscenti then hailed Tiwary as the next star and soon he was christened Chhota Dada; others called him India s Kevin Pietersen.

Almost a decade later, he remains Manoj Tiwary, remembered as the man who had once danced to Brett Lee s chin music, while the more compassionate ones recall him as one of India s unluckiest cricketers. Whatever little glamour King Kohli has left for others has been usurped by the elegance of Ajinkya Rahane and the class of Rohit Sharma, while purists have found heroes in KL Rahul, Murali Vijay, Karun Nair and Cheteshwar Pujara. And then there is the next batch, Kedar Jadhav, Ambati Rayudu and Manish Pandey, who have made it past Tiwary on the ladder to the top. Tiwary, senior to all of them, having made it to the national squad in 2007, disappeared in oblivion. Had luck smiled on the Bengal cricketer, he would have been playing Tests.

Even Kolkata Knight Riders (KKR) do not have a place reserved for one of Bengal’s favourite cricketing son. They will not in any time soon either, thanks to almost fist-exchanging moments with Gautam Gambhir in 2015. That, however, has nothing to do with this piece: fortune, benches and mistimed injuries have contributed to his fall; and yet again, in 2017, he finds himself underutilised by his IPL side Rising Pune Supergiant (RPS).

It is difficult being Tiwary. The fall of being touted as the next big thing of Indian cricket to being ignored in IPL auctions has been frustrating, both for the man and his fans. As a 22-year-old, he fetched a whopping $675,000 from Delhi Daredevils (DD) in the tournament s inaugural edition, in 2008. Eight seasons later he was snubbed in the auction. In 2017, at the wee hours of the auction, RPS picked him up for as cheap as INR 50 lakhs ($77,000). He finds a regular place in the RPS playing XI but what is his role?

Tiwary walked out as a finisher and donned the hat quite well on Saturday well enough to prove to the difference between the sides. On a sluggish surface, RPS had slumped to 130 for 7 in the 18th over against Royal Challengers Bangalore (RCB) before Tiwary took charge at M Chinnaswamy Stadium. The following over was bowled by Shane Watson, and Tiwary plundered 18 (3 fours, 1 six) off it. His 11-ball 27 took Pune to 161 a score they could compete with. LIVE CRICKET SCORECARD: Royal Challengers Bangalore vs Rising Pune Supergiant Match 17

RPS bowlers maintained the discipline to restrict the much-famed RCB battling line-up. Ben Stokes three-for sealed it for Pune but Harsha Bhogle s tweets puts things in perspective: My man-of-the-match would have been Manoj Tiwary. I thought his innings made the difference to the match.

My man-of-the-match would have been Manoj Tiwary. I thought his innings made the difference to the match.

But was this a one-off performance? What about the rest of the season?

Tiwary did not bat in RPS s opener this season, against Mumbai Indians (MI). Steven Smith led from the front with a match-winning 84 not out. It was a lucky escape for Pune in the Maharashtra Derby, where they had to simply rely on Smith s brilliance. MS Dhoni walked out to bat when RPS required 42 from 28 balls and ended with an unbeaten 12-ball 12.

Tiwary batted at No. 6 in RPS next game, against Kings XI Punjab (KXIP). He walked out to bat in the 12th over with the side s run rate just over 6. Dhoni was dismissed for 5 off 11 balls. Tiwary s 23-ball 40 not out lifted the score to 163, which was still not good enough for RPS to win.

He missed the next game against DD due to his father s demise but was brave enough to return for their next game against Gujarat Lions (GL). He batted at 5, up against Andrew Tye, who had his tail up with a hat-trick on IPL debut. He ran out of partners but contributed with an important 31 from 27 balls that helped RPS to 171 but GL chased the total down comfortably.

Tiwary has been around in the domestic circuit for over a decade. For those who have followed his career know that he is better suited up in the order. IPL maniacs will remember his two winning hits in the final over against Dwayne Bravo that helped KKR to their maiden IPL title in 2012.

However, Tiwary is not your regular finisher. If he is playing, he should be given the role of a regular top-order batsman. Rahul Tripathi has probably established himself as Rahane s partner at the top, but Tiwary can bat at No. 4, after Smith.

Let us see the batsmen used by RPS at No. 4 this season:

Stokes has done reasonably well at this position. However, with Dhoni s indifferent form, the side lacks firepower towards the end. It will be wise of RPS to use Stokes as a power hitter at No. 5 or 6, with Tiwary batting at No. 4.

Tiwary has been in rich form ahead of IPL and RPS needs to cash in on that. Earlier this season, he led Bengal to the runners-up slot in the Vijay Hazare Trophy and went on to lead East Zone to the Syed Mushtaq Ali Trophy Zonal T20 title. He has been good touch as well, scoring well over 1,000 runs in the domestic season.

RPS can perhaps take a cue from KKR. The two-time IPL champions have a settled order where they use Manish Pandey at No. 4. The move has paid off well. Even Sunrisers Hyderabad (SRH) have given Yuvraj Singh a fixed slot at No. 4. MI have looked to do the same by having Rohit, their most experienced batsman, at the same position.

The hullaballoo currently is around Dhoni, which is bound to happen because of his stature. With 61 runs at 15.25 and at a strike rate of just above 87, Dhoni has only disappointed. The number of dot balls played by Dhoni is a matter of concern. RPS should look to revolve their middle-order around Smith and Tiwary, with Stokes as the big-hitter and Dhoni as the back-up.

RPS have time to sort out this conundrum as they play their next game on Saturday, against defending champions SRH, at Pune. With 2 wins from 5 games, the time seems ripe for RPS to rectify the glitches as the tournament is only expected to intensify in coming days. 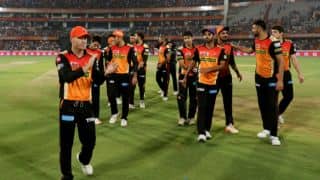